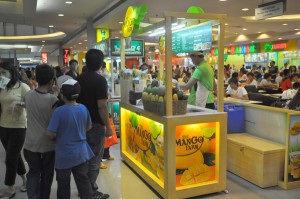 Filipinos are fond of food.

Each province all over the country has its own specialty, and Filipinos are known to spend more on food than anything else. Family gatherings revolve around meals, and people really go out of their way to experiment and find the best places to eat in the city.

This is why most entrepreneurs get into the food business. Even the most prominent celebrities in the country opt to open restaurants rather than selling any other kind of goods.

But for those who don’t have the capacity to open huge food chains and invest millions of pesos in upscale restaurants, opening their own food business can be close to impossible.

There’s a trend in the small-scale business industry called franchising, and it has taken off in a big way in the last few years. With so many malls rising all over the metropolis and all over the country in recent years, franchises have found an ideal outlet to make easier money than, say, a stand alone cart in a busy street corner.

According to the Philippine Franchising Association (PFA), “Franchising refers to the method of practicing and using another’s perfected business concept.” In other words, they offer a formula that has been proven to work.

In their website, PFA explains the concept of franchising: “In a franchise relationship, the franchisee is granted the right to market a product or a service under a marketing plan or a system that uses the trademark, name, logo and advertising owned by the franchisor.”

While not everyone has the capacity or the capital to start a business from scratch, the option to franchise is considerable since the money needed is small and the return is huge.

PFA identified numerous advantages of franchising. It has a high success rate, since this business model is based on “proven ideas and implementation.”

A recognized brand and trademark would also be beneficial for small-scale entrepreneurs, as said in the PFA website. Just like name-recall in politics, franchising allows businesses to be recognized without too much marketing efforts and costs.

For the first-time businessman, franchising is also beneficial since franchisors are able to impart their operating and management efficiencies to their fran­chisees. Not on­ly that, but opting to go for a franchise would make it easy for businessmen to obtain financing, and since a good franchise is an “appreciating asset,” it is easy to re-sell as well.

Huge profits can also be expected in the franchising business since lower-cost materials and supplies are utilized. Low-cost combined with “the right marketing strategy, brand positioning, and growth of the customer base, could only translate to increase in sales and immense profit,” according to PFA.

Lastly, PFA says that franchisor-fran­chisee relationships may hamper the success of the business, since failed expectations between two parties may arise.

The five principal sectors in franchising are: fastfood; retail clothing; cafes, confectioneries and bakeshops; hospitality and wellness; and food carts, PFA said. From 50 brands in the 1980’s, that number has increased to over a thousand in the last three decades, with 68 percent of the businesses coming from homegrown concepts.

According to PFA, “Franchising contributes $6.6 billion or five percent of the Philippine GDP (gross domestic product) and provides employment for one million Filipinos.”

That is why more business-minded Filipinos are getting into franchising, and they are visible all over the country, especially in crowded places such as malls and public transportation terminals.

The Waffle Story stall in SM City North Edsa that is owned by a Korean businesswoman earns P 60,000 a month, with sales doubling during holidays. Considering that the stall open just last April 2, the waffle franchise already seems promising for the foreign entrepreneur.

According to Janeo Dumlao, a crew of the Waffle Story, their consumers are mostly students of University of the Philippines (UP) and their longtime customers since the waffle stall opened.

He said that the projection of their stall after a year is “siguro mag-eexcel pa ang sales nito [waffle story] next year, halos mga students kasi talaga ang buyers namin, [Maybe we will excel next year, because our customers are usually students]” while the class opening is fast approaching their total sales is waiting to increase.

Mary Grace, which was named after the owner Mary Grace Dimacali, is also establishing its own name in the food business.

“Lasa na hindi nagbabago simula noon hanggang ngayon [taste that doesn’t change from then until now]” Cathyrine Sanoria, Manager of Mary Grace Kiosks at SM Mall of Asia (MOA) said when asked about what makes their local and foreign customers come back again and again.

The Kiosks store at MOA was established since the mall opened in 2006. Local mall goers such as office employees, middle class families and foreign tourists stopped to buy any of their trademark pastries.

Among all of their goods, ensaymada serves as their best-selling product because of the consistent quality and baked-fresh goodness which their competitors are not likely to have.

Filipino passion for bread is not ordinary as what we see, but average gross shows how perfectly Filipinos imbued and love breads.

According to Sanoria, their average gross on weekdays ranges from P 15,000 up to P20,000. While on weekends, the kiosk store generates about P 20,000 to P 25,000. Her initial computation shows in every piece of bread a customer would buy, 40 percent goes to the capital while the rest is income.

Their best seller is buko or coconut shake, costing P30 for a small cup, P40 for medium cup and P60 for the large cup.

“Malakas yung benta pag December to May kasi summer at madami tao, pero pag mga June na mahina na kasi pasukan na madami na gastos, [Our sales our high from December to May because there are lots of people, but sales are slow come June because it’s the beginning of classes and there are lots of expenses]” said Ferdinand Olile, a sales associate of Buko Maxx North Edsa.

Small and relatively unknown franchises—as opposed to the likes of Jollibee, Chowking, Greenwich and McDonald’s, among others—owe much of their success to the malls, which have replaced public parks as the favorite places for Filipinos to spend time in. They may not have any intention of buying anything when they visit malls, but sooner or later they will need to eat and drink.

This need, coupled with the Filipino’s innate curiosity to try out anything new, especially food, gives the small franchises the opportunity to become big success stories. The only requirement is that the food or drinks offered must be pleasing to the Pinoy’s taste buds.

With little risk and so much to gain, the small-scale fran­chising industry is clearly on its way to turning countless middle class Filipino investors into potential millionaires.