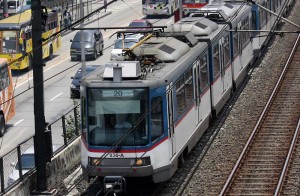 THE most remarkable feature of the press conference Transportation and Communications Secretary Emilio Abaya held on Friday was his effort to discredit the Czech Republic’s Ambassador Josef Rychtar.

This effort was markedly noticeable in the President’s spokesman Secretary Edwin Lacierda’s words on the subject to Malacañang reporters.

What impressed our reporter who attended the Abaya presscon was the Secretary’s insistence that the Czech Ambassador was, in effect, lying when he told first The Times that that the Czech company Inekon, which has been bidding to supply MRT3 coaches and modernization technology and systems, had been blacklisted as a DOTC supplier.

The absence of a blacklist against Inekon or the Czech Republic was also highlighted to Palace reporters by Secretary Lacierda.

The Times special report of three parts by our Chairman Emeritus Dante A. Ang did not have the word “blacklist” or “blacklisted.”

DOTC supporting the Inekon proposal and “submitted to the Department of Transportation and Communication (DOTC) booklets of extensive technical plans and financial proposals in order to comply with Philippine Procurement Procedures.”

Until now, Inekon and the Czech Republic’s Ministry of Trade and Foreign Affairs are still waiting for a response to the letters.

However, as detailed in Dr. Dante Ang’s 3-part special report, the Inekon proposal was the subject of conversations between the Czech Ambassador, MRT General Manager ______ Vitangcol and his friends.

Some of these conversations involved an effort to get Inekon to pay bribe money as much as $30 million and at last lowered to $2.5 million.

Is it because the Palace officials and Secretary Abaya want to clear not only Mr. Vitangcol but its supervisory agency, the DOTC,  from any involvement in the shameless extortion attempt on the Czech Republic?

Nevertheless, that Secretary Abaya at his Friday presscon announced that he is initiating a probe on  the MRT General Manager’s possible involvement in the extortion attempt indicates two things.

1.    That the expose authored by Dr. Ang, and supported by documents and interviews with persons who affirmed having witnessed and heard the extortion attempt, has moved the Aquino administration to do the right thing.

2. That there is hope in the President’s Daang Matuwid growing into more than a dream.