Read Next
No Holds Barred Episode 4: Road to Tokyo Olympics with Hidilyn Diaz 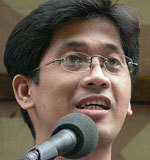 Kim Gargar, a PhD student of Chronobiology from the University of Groningen, was illegally arrested last October 2 by elements of the 67th Infantry Battalion while doing fieldwork for a project in Typhoon Pablo devastated areas. He was caught in a crossfire between government soldiers and the New People’s Army (NPA) and remains in detention at the Mati Provincial Jail.

Already have an active account? Log in here.
Keep reading with one of these options:
Premium Subscription
P 80 per month
(billed annually at P 960)