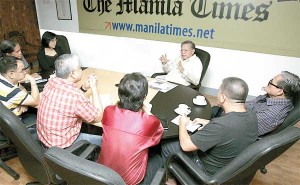 Former chief justice Reynato Puno (center) explains the process of a People’s Initiative to editors and reporters of The Manila Times. PHOTO BY RENE H. DILAN

FORMER Supreme Court chief justice Reynato Puno warned on Monday of chaos, including a possible military intervention, if the People’s Initiative (PI) to scrap the pork barrel, which he considers as the “last peaceful alternative” against government fund misuse, fails.