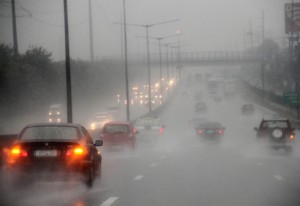 Zero visibility force motorists to turn on headlights at the North Expressway. While Metro Manila was far from the center of the super typhoon, strong rains forced schools and offices to close early. Photo By Mike De Juan

Super Typhoon Yolanda is the strongest tropical cyclone to have made landfall in recorded history, Scientists suspect monster typhoons like Yolanda are a consequence of climate change.

“As far as we know—I mean, records go back to middle 1800’s in a lot of cases, so certainly, there could have been stronger than this. But as far as we know, there’s never been as strong as this that has made a landfall,” Carl Parker, a hurricane expert from The Weather Channel said.

“It is the strongest one to have made a landfall in recorded world history,” Parker added.

Yolanda is much stronger than Hurricane Camille, what used to be the strongest storm to hit land. Camille smashed into the US at 190 mph (305 kph) in 1969.

“It was a much smaller storm; this one (Yolanda) is stronger and bigger than Camille,” Parker said.

But the US Navy and Air Force’s Joint Typhoon Warning Center in Hawaii said the typhoon’s maximum sustained winds reached 315 kph, gusting up to 380 kph.

Dr. Jeff Masters, a hurricane expert from Weather Underground, agreed with the TWC.

In his blog, he said that “Haiyan (Yolanda’s international name) had winds of 190 to 195 mph (305 to 313 kph) at landfall, making it the strongest tropical cyclone on record to make landfall in world history.”

Some scientists have said climate change may be increasing the ferocity and frequency of storms.

Masters said warm Pacific waters were an important reason for the strength of Haiyan, but said it was premature to blame climate change based on the scanty historical data available.