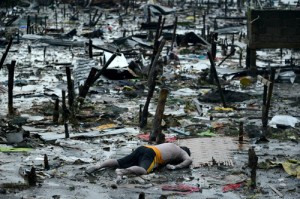 The body of a dead man is seen at the bay of Tacloban on Sunday. Communities in the city were reduced to waste- lands after super typhoon ‘Yolanda’ sliced through them last week. AFP PHOTO

The death toll from a super typhoon that decimated entire towns in the Philippines could soar well over 10,000, authorities warned on Sunday, making it the country’s worst recorded natural disaster.

The horrifying estimates came as rescue workers appeared overwhelmed in their efforts to help countless survivors of Super Typhoon Yolanda (Haiyan), which sent tsunami-like waves and merciless winds rampaging across a huge chunk of the archipelago on Friday.

Police said they had deployed special forces to contain looters in Tacloban, the devastated provincial capital of Leyte, while the United States announced it had responded to a Philippine government appeal and would send military help.

“Tacloban is totally destroyed. Some people are losing their minds from hunger or from losing their families,” high school teacher Andrew Pomeda, 36, told Agence France-Presse, as he warned of the increasing desperation of survivors.

“People are becoming violent. They are looting business establishments, the malls, just to find food, rice and milk . . . I am afraid that in one week, people will be killing from hunger.”

Authorities were struggling to even understand the sheer magnitude of the disaster, let alone react to it, with the regional police chief for Leyte saying 10,000 people were believed to have died in that province alone.

“We had a meeting last night with the governor and, based on the government’s estimates, initially there are 10,000 casualties (dead). About 70 to 80 percent of the houses and structures along the typhoon’s path were destroyed,” Chief Superintendent Elmer Soria told reporters in Tacloban.

However, while Leyte was believed to have been the worst hit, the carnage extended across a 600-kilometer stretch of islands through the central Philippines.

A few dozen other deaths had been confirmed in some of these areas, but authorities admitted they were completely overwhelmed and many communities were still yet to be contacted.

He said among the communities yet to be contacted was Guiuan, a fishing town of about 40,000 people on Samar island that was the first to be hit after Yolanda swept in from the Pacific Ocean.

About 130 hundred kilometers to the west of Tacloban, the popular tourist islands of Malapascua appeared to be in ruins, according to aerial photographs, with people there unaccounted for so far.

“The coast guard commander cannot communicate with the area. They are cut off in communications and from power,” regional civil defense director Minda Morante said.

It is located along a typhoon belt and the so-called Ring of Fire, a vast Pacific Ocean region where many of Earth’s earthquakes and volcanic eruptions occur.

However, if the feared death toll of above 10,000 is correct, Haiyan would be the deadliest natural disaster ever recorded in the country.

Until Haiyan, the deadliest disaster was in 1976, when a tsunami triggered by a magnitude 7.9 earthquake devastated the Moro Gulf on the southern Philippine island of Mindanao, killing between 5,000 and 8,000 people.

In Washington, the Pentagon announced that US Defense Secretary Chuck Hagel had responded to a request from the Philippines for military aid.

“Secretary Hagel has directed US Pacific Command to support US government humanitarian relief operations in the Philippines in the wake of Typhoon Haiyan,” it said.

Ban is “deeply saddened by the extensive loss of life” and devastation caused by Haiyan, said UN spokesman Martin Nesirky in a statement.

In Samar, at least 300 people were confirmed killed while 2,000 others were declared missing.

Leo Dacaynos, a member of Samar’s disaster management council, told DZBB that the 300 people died in Basey, a small town on Samar.

He said almost 2,000 other people were missing in Basey and Barabot town.

This was the first confirmation of large-scale fatalities in the island of Samar.

However, vast areas of Samar, an island of over 733,000, still have not been contacted over two days after the typhoon struck.

Most of the deaths were caused by the storm surge which brought floods 20 feet deep in the two towns.

Basey and Barabot are coastal municipalities.

Daraynos appealed for food, water and other emergency supplies for the affected towns as stocks there are getting low.

An Australian man widely identified as a former priest who blew the whistle on child sex abuse in the Catholic Church is among the dead.

The Department of Foreign Affairs on Sunday said the 50-year-old New South Wales man had been killed, although it declined to confirm his identity.

But the Australian Broadcasting Corporation and other media said he was former priest Kevin Lee, who was removed from his parish responsibilities in Sydney last year after admitting to marrying a woman in secret.

Lee spoke out about abuse in the Catholic Church on an ABC program, Unholy Silence, last year. He was believed to be living in the Philippines with his Filipina wife and young baby.

Officials in the regions of Calabarzon, Mimaropa, Bicol, Western, Central and Eastern Visayas, Northern Mindanao and Caraga are still assessing the effects of the disaster.

DSWD has extended an initial P10.6 million worth of relief assistance to Bicol, Western and Central Visayas, Northern Mindanao, and Caraga.

In Tacloban, the DSWD set up a satellite internet service at the city hall to enable people to communicate with their relatives.