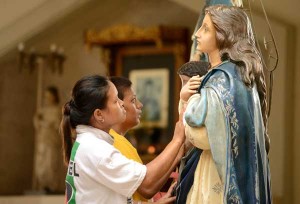 TACLOBAN CITY: United States and British warships were deployed on Tuesday to the typhoon-ravaged Visayas where more than a thousand people have been confirmed dead and countless survivors are begging for help in rain-soaked wastelands.

“We are certainly expecting the worst. As we get more and more access we find the tragedy of more and more people killed in this typhoon,” United Nations humanitarian operations director John Ging said.

The UN warned 10,000 people were feared dead in just one city, Tacloban, the provincial capital of Leyte province where five-meter waves flattened nearly everything in their path.

Nearly 10 million people, or 10 percent of the Philippines’ population, have been affected, while 660,000 have lost their homes, the UN estimated.

An international relief effort has begun to build momentum, with the United States and Britain announcing they would quickly deploy warships carrying thousands of soldiers to the Philippines.

The Pentagon said the aircraft carrier USS George Washington, which has 5,000 sailors and more than 80 aircraft aboard, was enroute to the Philippines on Tuesday from Hong Kong where it is currently on a port visit.

Five other warships are also being deployed, and the group is expected to reach the Philippines within two to three days, the Pentagon said. Ninety US marines arrived in Tacloban on Monday as an advance team.

“These ships and aircraft will be able to provide humanitarian assistance, supplies, and medical care in support of the ongoing efforts led by the government and military of the Republic of the Philippines,” the Pentagon said.

The fleet’s helicopters and aircraft will deliver aid from ship to shore, shuttling back and forth to provide supplies such as water, food and medical supplies.

“It’s a complete aircraft carrier strike group going into the area. That’s a pretty sizeable response,” said Captain Tom Disy, whose ship the USS Antietam was moored next to one of Hong Kong’s major shopping malls.

The carrier group arrived in Hong Kong late last week on a routine rest and recreation port visit and was originally scheduled to depart on Wednesday.

“Our sympathies are strongly with the people of the Philippines and we will take it as it comes,” Disy said.

The carrier will be accompanied by the cruisers USS Antietam (CG 54) and USS Cowpens (CG 63), and the destroyer USS Mustin (DDG 89). The supply ship USNS Charles Drew (T-AKE-10) is already underway and will rendezvous with the group as they get closer. USS Lassen (DDG 82) got underway yesterday, while m embarked on board USS George Washington is Carrier Air Wing Five (CVW-5).

These ships and aircraft will be able to provide humanitarian assistance, supplies, and medical care in support of the ongoing efforts led by the Philippine government and military.

Britain will also send a warship, currently deployed in nearby Singapore, “at full speed” to the Philippines, Prime Minister David Cameron announced on Monday.