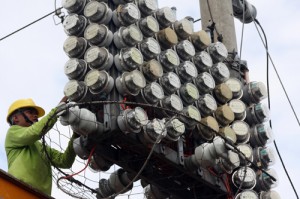 Workers doing some maintenance check up on some electricity meters in Quezon City on Sunday. File Photo[/caption]

Forget all the talk that corruption, flawed institutions, even a damaged culture explain our continued backwardness, our falling every year behind our neighbors in Southeast Asia despite the tens of billions of OFW dollars flowing into our country every year.

The single most important reason — which is also why I have devoted several columns to the issue — why our businesses remain uncompetitive, why industries have been moving out from our country is our high cost of power. 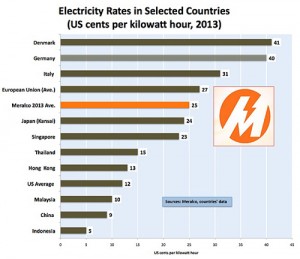 It’s the biggest expense for industrial firms, accounting for as much as a fourth of their costs, and industry, we have to remember, still make up the backbone of a strong economic base. Because of high power costs, even foreign companies, which have been here for decades, have moved out to other countries in Southeast Asia, and especially to China. The only “industry” we could be competitive in is skilled-labor intensive business processing and possibly tourism.

Based on Meralco’s tariffs (using residential rates of 200 kilowatt hours per month consumption) which averaged 24 US cents per kilowatt hour in 2013, the price we pay for our electricity, believe it or not, is the fifth highest in the world.

If our electricity prices were the criterion for membership, we are in the league of the richest countries in Europe, and our rates are even a bit higher than Japan (Kansai region), 24 US cents, and Singapore, 23 cents.

How can we convince foreign investors to build industries here, when the costs of power in our competitors in the neighborhood, Indonesia, Thailand, and Malaysia, are just fractions of ours?

No wonder even Filipino Chinese tycoons are moving out of the country to put up their factories in China, where electricity rates are nearly a third of ours. Have you noticed that even shampoos and toothpaste are now made in Thailand and Indonesia? Electricity in Thailand costs nearly half that of ours, while that in Indonesia is only a fifth of ours!

Our high electricity prices are such a paramount concern for our country, that there must be some sort of national summit to determine what to do about it. But President Aquino is totally unconcerned about it, with his spokeswoman Abigail Valte facetiously, like a juvenile, dismissing the issue as something government has “no magic wand to wave on.”

Why our high power costs? It is a saga of how our elites have, in good and bad times, squeezed our society for profits.

With the 1973 oil global crisis nearly throwing a monkey wrench into his plans for a lifetime dictatorship, Marcos was determined to put up a nuclear power plant, and he totally relied on such a plant to supply the country’s electricity demand in the 1970s. When it was finished in 1984, it cost $2.3 billion, four times the original estimates, and allegations of a massive overprice by a Marcos crony had been one of the hottest allegations of the anti-dictatorship movement.

But it was his successor Corazon Aquino who made it an albatross around the Philippine neck that’s been a major reason for our high power rates. With the April 1986 Chernobyl disaster used as a horror story, and since the anti-nuclear activists here were in the anti-dictatorship movement, Aquino ordered the plant mothballed — even as several experts gave the go-signal for its operation. She did not work to have replacements for its 620 megawatt capacity put into place.

Following the advice of her pro-big business Cabinet officials, Aquino did not seek a condonation of the US private and government loans used to finance the plant.

While the US was packaging Cory as a saint of democracy, its officials quietly told her that if she repudiates the nuclear-plant loans, the country would not only be a pariah in the global financial community, but that the US would not lift a finger to stop the attempts to topple her.

“Hindi tayo balasusbas sa mga utang natin,” Cory then boasted. It was twenty-one years later, in 2007, that the Philippines made its final payment on the loan. It spent P120 billion in principal and interest charges for the plant that never produced a single kilowatt of electricity.

This was P120 billion that could have been used to finance the building of a dozen conventional power plants to supply the country’s electricity demand throughout the 90s.

While the loans were later on transferred to the national government, these were carried for many years in the books of the state-owned National Power Corp. (NPC) — putting it yearly in the red, which prevented it from borrowing to finance new power plants. As a result, demand outstripped supply throughout Cory’s watch, and long hours of brownouts became routine in the country, discouraging foreign investments.

Cory’s successor President Fidel Ramos had a bright idea: Have private companies go into power generation to supply the electricity, reversing the Marcos policy of having solely the NPC to build and operate power plants. After all, the NPC — because of its payments for the nuclear power plant loans — was technically bankrupt, and therefore could not borrow from the market to finance the building of new plants.

Great idea, but our corporate elite in effect blackmailed Ramos, justifying their action on grounds that they would have to be assured of profits before they go into that business.

Thus were instituted what got euphemistically called “take-or-pay” arrangements with the “independent power producers.” These arrangements were in reality a capitalist dream of a risk-free business: The NPC committed to buy the power generation capacities of these private generators, even if NPC doesn’t need any electricity, i.e., when demand falls, and therefore the generators would not have to spend money to produce electricity.

It seemed a good deal until the 1997 financial crisis hit us. It slowed down the economy, and therefore demand for electricity.

Another euphemism was invented: “stranded costs,” or the power NPC bought from the private power generators, which it couldn’t sell to utilities. By 2010, these costs — “stranded” in the NPC’s books, and no way to recover it unless raising future tariffs — had ballooned to P80 billion. After shedding off the nuclear plant debt-albatross, the NPC was again deep in the red because of these stranded costs.

For various reasons, including the fact that there was a privatization rage in developed countries at that period, which our US-educated technocrats aped, we junked the policy — as continued in China, Thailand, Malaysia, and Indonesia, all of which have electricity tariff much lower than hours — of a government- controlled power industry.

Capitalism — private sector funds and expertise — would take care of this public good that is affordable electricity. A so-called market for power was set up, the Wholesale Electricity Spot Market (WESM), which I’ve explained in the last two columns is a charade, and far from being a “spot” market because most of the transactions are bilateral deals.

Private companies build and operate the generators; the power is transmitted by a private company (the National Grid Corp., a joint venture of a Henry Sy scion and a Chinese firm) to private companies (the biggest of which is Meralco), which distributes the electricity to the final users.

Adam Smith’s invisible hand of the market to the rescue. Capitalism was supposed to bring down electricity rates.

We have a power industry controlled by the country’s big business. Indeed, it has been such a profitable business that one of South Asia’s biggest tycoons, Indonesian Anthony Salim, in 2010 bought, through several firms he owns, into the biggest electric distribution company to control it, Meralco. The distribution firm has become one of Salim’s biggest money earner, its core net income rising from P2.6 billion in 2008 to P16 billion in 2012, and a forecasted P17 billion last year.

Meanwhile, power prices have steadily gone up since the private sector came to control it. Filipinos now have the highest electricity bills in Asia, and the fifth most expensive in the world.