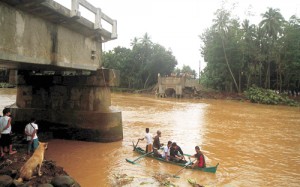 Residents ride a wooden boat as they cross a river after the bridge collapsed overnight due to flooding brought about by heavy rains in Linamon town, Lanao del Norte province. AFP PHOTO

THE death toll from rampaging floods that continue to inundate towns in Mindanao rose to 22 as close to 200,000 people fled their homes, officials said on Tuesday.

temporary shelters when they were hit by fresh flooding,” Irag said.

Six more victims were buried in a landslide on the small southern island of Dinagat while three other people drowned in nearby areas, John Lenwayan, a civil defense official for the region, said.

The bad weather also forced more than 194,000 people to flee their homes, Irag and Lenwayan said.

Six persons were buried in a landslide on the small southern island of Dinagat while three other people drowned in nearby areas, Lenwayan added.

Several bridges were washed away in Southern Mindanao, forcing many residents to travel by banca.

The rains started abating on Monday and some of those who took refuge in government-run shelters were returning to their homes.

In Sulu, more than 200 houses were destroyed following a storm surge on the coastal town of Jolo.

Officials said at least 236 families were affected by the storm surge brought about by a low-pressure area over much of the region. There was no immediate report of casualties, but the surge also damaged a portion of the Port of Jolo.

Nearly 200 passengers were also stranded in the port after authorities cancelled all boat trips due to the dangers posed by huge waves.

Fazlur-Rahman Abdulla, executive director of the Sulu Area Coordinating Council, said they are collecting other reports from various coastal towns and island municipalities.

“Governor Totoh Tan has inspected the damage brought by the storm surge and we are still awaiting reports from other areas so we can assess the extent of the damage and help those affected by the calamity,” he told The Manila Times by phone from the Sulu province.

The Department of Social Welfare said it would send relief packs to families affected by the storm surge in Jolo.

A policeman’s son is also missing after their jeep overturned while trying to cross a flooded spillway in Zamboanga del Sur.

Officials said the policeman, PO1 Nemesio Batingal, and 12 other passengers, survived the accident, which occurred in the village of San Jose in Mahayag town. The jeep was also loaded with bags of fertilizers when strong river current swept the vehicle.

The Department of Public Works and Highways (DPWH) said nine bridges in Mindanao were either totally destroyed or partially damaged.

Six of the bridges are no longer passable, according to DPWH region 11 Director Mariano Alquiza.

The Quinonoan bridge in Tarragona, Caraga and Governor Teodoro

Palma Gil bridges are not passable, Alquiza said. He added that the Lumao bridge in Cateel was totally washed out.

He said that four areas were hit by landslides, including the Montevista-Mati Boundary Road in Araibo, Liboton, Compostela Valley.

The MIAA said that four Zest Air flights going to Cagayan and its return flight to Manila were also canceled.

The low pressure area in Mindanao will continue to induce heavy rains as it remains stationary in the next two days, the Philippine Atmospheric Geophysical and Astronomical Services Administration said.

Weather forecaster Glaiza Escullar said the LPA is not expected to move in the next two days because the northeast monsoon and high pressure area hinders its movement.

She advised people in Mindanao, Eastern and Central Visayas and the Bicol region to take necessary precautionary measures as heavy rains may trigger more flashfloods and landslides. These regions will have cloudy skies with moderate to occasionally heavy rainshowers and thunderstorms.

With reports from Benjie L. Vergara, AFP and PNA