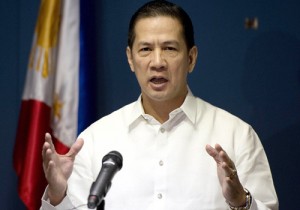 The Philippines on Tuesday lodged a strong protest against China over the recently reported harassment of Filipino fishermen at the Panatag (Scarborough) shoal.

The Department of Foreign Affairs (DFA) summoned the charge d’affaires of the Chinese Embassy in Manila, but officials did not say how the meeting went.

The DFA said there were similar attacks in previous years against Filipino fishermen in the shoal, which the Philippines also calls Bajo de Masinloc.

“There were certainly attempts to drive them [Filipino fishermen] away from the Bajo de Masinloc,” Hernandez told reporters.

However, the Philippines has not taken official action on those incidents.

The department considers the January 27 attack as an “escalation” of tensions in the area. It said the incident “further threatens the peace in the region [West Philippine Sea].”

“The department strongly protests the acts of harassment and the manner by which this is committed by China to forcefully drive away vessels from Bajo de Masinloc,” Hernandez said.

“The Chinese vessel continuously blew its horn and thereafter doused the fishing vessels using the water cannon for several minutes,” he said.

About 14 Filipino boats were fishing in the area at the time, he added.

“The department vehemently protests the acts of China when its law enforcement vessels drove away Philippine vessels seeking shelter on Bajo de Masinloc during inclement weather,” he said.

The official insisted the Philippines can exercise its sovereignty and jurisdiction over the Panatag shoal.

He added that Filipino fishermen have the right to pursue their livelihood in the region.

For its part, the Chinese Foreign Ministry on Monday maintained its jurisdiction and sovereignty over the entire West Philippine Sea (South China Sea) based on its nine-dash line, the validity of which is being challenged by the Philippines before the International Tribunal of the Law of the Sea (Itlos).

Panatag, a rocky outcrop just 200 miles away from Luzon, is considered a traditional fishing ground for Filipinos. But China claims the area even if it is 600 kilometers away from Hainan, the nearest major Chinese land mass.

President Benigno Aquino 3rd said he was not sure if the incident was meant to harass the local fishermen, citing “inconsistencies” in the reports that have reached him.

procedure. Kasi [Because] as of yesterday, we had fishermen inside the shoal—inside the shoal who are not being harassed nor intimidated by any entity,” he pointed out.

Nevertheless, he said the Philippines will send a diplomatic message to the mainland “to ask them to explain what this incident was all about.”

“I think it is proper for us to ask them exactly what this incident was all about, what their intentions are. And the DFA and the DND [Department of National Defense] after conferring and after getting the necessary proof, I’m sure, are already drafting the appropriate communications,” Aquino added.

The Philippines, Brunei, Malaysia, Taiwan and Vietnam have competing claims to parts of the West Philippine Sea, which is home to vital shipping lanes and is believed to sit atop lucrative deposits of natural resources.

Last year, Manila asked a United Nations arbitration tribunal to rule on the validity of China’s claim to most of the area, but Beijing has yet to participate in the process.