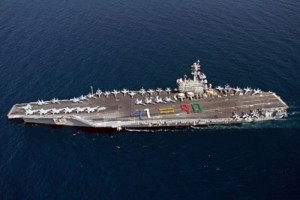 BAGHDAD: Iraq on Sunday pressed a counter-offensive against militants who have seized a swathe of the country, as former United Nations mediator Lakhdar Brahimi blamed the sweeping unrest on world neglect of the Syrian conflict.

As the United States responded to the crisis by deploying an aircraft carrier in the Gulf, Iran warned against foreign military intervention in its Shiite neighbor.

The militants, spearheaded by the powerful jihadist Islamic State of Iraq and the Levant (ISIL), have overrun all of one province and chunks of three more since they launched their offensive late last Monday.

Security forces have generally performed poorly, with some abandoning their vehicles and positions and discarding their uniforms, though they seem to have begun to recover from the initial onslaught and have started to regain ground.

Iraqi commanders have said security forces were now starting to push the militants back, and that soldiers had recaptured two towns north of Baghdad.

They will be joined by a flood of volunteers, urged on by a call to arms from top Shiite cleric Grand Ayatollah Ali al-Sistani.

A recruitment center for such volunteers at the town of Khales in central Iraq came under mortar attack on Sunday, leaving six people dead, including three Iraqi soldiers, police and a doctor said.

US President Barack Obama said he was “looking at all the options” to halt the offensive that has brought the militants within 50 miles (80 kilometers) of Baghdad’s city limits, but ruled out any return of US combat troops.

Obama has been under mounting fire from his Republican opponents over the swift collapse of Iraq’s security forces, which Washington spent billions of dollars training and equipping before pulling out its own troops in 2011.

Iran warned on Sunday that “any foreign military intervention in Iraq” would only complicate the crisis.

“Iraq has the capacity and necessary preparations for the fight against terrorism and extremism,” foreign ministry spokesman Marzieh Afkham was quoted as saying by the ISNA news agency.

“Any action that complicates the situation in Iraq is not in the interests of the country nor of the region,” Afkham said, adding, “The people and government of Iraq will be able to neutralize this conspiracy.”

Afkham’s comments come a day after President Hassan Rouhani said he believed the Iraqis have the capacity to “repel terrorism” and that Iran had not been asked for help by its neighbor.

But in surprise comments, he added that Iran may consider cooperating with its arch-foe the United States to fight the militants in Iraq.

“If we see that the United States takes action against terrorist groups in Iraq, then one can think about it,” he said, despite the lack of diplomatic relations between Tehran and Washington for more than three decades.

Brahimi, the former United Nations and Arab League envoy to Syria, told Agence France-Presse the international community’s negligence of the conflict in neighboring Syria had precipitated the crisis in Iraq.

“It is a well known rule: a conflict of this kind [in Syria] cannot stay confined within the borders of one country,” said Brahimi.

The international community “unfortunately neglected the Syrian problem and did not help to resolve it. This is the result,” said Brahimi, who resigned from his post as UN-Arab League representative to Syria in May.

As Iraq troops began to drive back the militants, they found grisly scenes, amid reports that the militants had carried out summary executions of Iraqi security forces members they captured.

Troops found the burned bodies of 12 policemen as they recaptured the town of Ishaqi in Salaheddin province from the insurgents, a police colonel and a doctor said.

With the situation on the ground confused, Iraq launched an air strike on a convoy of Kurdish forces, which have moved into areas including eastern Iraq, where the strike took place.

It was not immediately clear if the Saturday night attack near Khanaqin, which officers and a doctor said on Sunday had killed six and wounded some 20 others, was specifically targeting the Kurdish troops or a case of mistaken identity.

Parts of Khanaqin, located 150 kilometers (95 miles) northeast of the Iraqi capital, were held by militants, while others were controlled by Kurdish forces as of Saturday, officers said.