Juramentados and the development of the Colt .45 caliber Model 1911 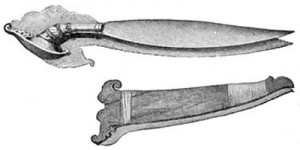 The following words are Keifer’s description of the elaborate preparatory ritual of the juramentado: “The preparatory rituals for a single individual act of parrang sabbil were quite complex, but basically were all extensions of the need to insure that the corpse of the sabbil would be properly prepared to enter the afterlife. Accordingly, all of the normal rituals for a corpse— or at least those which were feasible—were done for the suicide while he was still alive. Religious officials would bathe his body in the same manner as they would a corpse: three times facing east, three times facing west, and three times on his back. Dirt would be removed from the anus and other bodily orifices to insure complete ritual purity. The head would be- shaven, eyebrows plucked, and fingernails neatly trimmed. Finally, the suicide would be dressed in a suit of shroud-like white clothing specially prepared for the occasion. As is common in other Moslem rituals, the state of purity created by these rituals could be immediately broken by contact with women, bodily elimination, or any other unclean act. While not derived from the normal rituals for a corpse, one preparatory act is interesting as a reflection of the masochistic and quasi-sexual attitude which underlay much of the institution. The penis of the sabbil was bound tightly in an erect position to ensure the success of .the mission. While this might reasonably be interpreted as simply an instance of homeopathic magic (upright penis equals upright body) designed to ensure that the sabbil does not fall too quickly, the potential implications go even deeper. For a man to be in a state of ritual purity and nevertheless have an upright penis—albeit a magical one—is quite incongruous with Moslem ritual practice. Why this should be so is a puzzle, but it may be a reflection of a theme I will pursue in more detail below: that the peculiar value of the institution of sabbil for the Tausug is that it unites two otherwise disparate roles in their culture—the man of piety and the man of action.”

Already have an active account? Log in here.
Keep reading with one of these options:
Premium Subscription
Less than P 71 per month
(billed annually at P 850)
TRY FREE FOR 30 DAYS
Subscribe Now
Digital + Print
P 680 per month
(billed annually at P 8,160)
***Delivery charges may apply to subscribers outside of Metro Manila
Subscribe Now
This website uses cookies to ensure you get the best experience on our website. By continuing to use this website without disabling cookies in your web browser, you are agreeing to our use of cookies. Read More.