The other side of ‘Separados’ 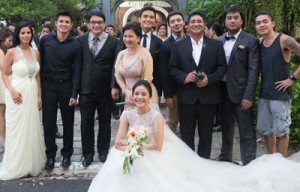 Asked how the singer was considered for the film, Sampedro revealed that he and Santos are close friends. When they were watching 2013’s Cinemalaya 9, Santos encouraged Sampedro to join the indie film fest. The director said he would in one condition: “That Erik has to be part of the cast!”

Finally, the last of the separados—an alcoholic troubled by religious differences with his wife—is portrayed by Alfred Vargas, who also co-produced the film with Sampedro.

Ironically, fate and circumstance bring the separated men together at a church wedding, where one of them takes a second chance at marriage.

Separados is Sampedro’s second outing at the Cinemalaya film festival. His first entry was in 2009 with the film Astig, which won him Best Director.

Separados will have gala screenings at Fairview Terraces on August 2 and at CCP on August 3.