A short and sweet historical tour of San Juan City 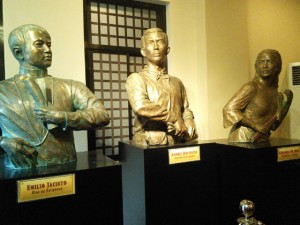 “This is prototype for the initiative to promote San Juan through tourism,” added Abby Bacani who helped Go organize the project.

The half-day tour started at 12:30 in the afternoon. The first “Celebration of Heritage” headed out from the historic Club Filipino where the participants gathered and boarded the new San Juan City bus, which fittingly bore a colorful collage of the most important landmarks in the vicinity.

Club Filipino, as tour guide Penny Sy related, is the first exclusive social club in the country founded in 1898 by Spanish mestizos and members of the native aristocracy.

Allenmarie Lheng del Castillo-Alejo, San Juan City’s tourism officer, added that Club Filipino is also known as a meeting ground for Filipino political progressives and the site of several political events throughout Martial Law and beyond the Edsa Revolution.

San Juan Bridge.  A short distance from the club, the bus passed the Greenhills Shopping Center, the premiere shopping destination, which today boasts of some 2,000 stores.

From there, the bus headed to Wilson Street, which bustled with concept restaurants as well as established brands like Alex III and Gloria Maris.

This was the route to the historical San Juan Bridge, which also passes by St. John the Baptist Church or the Pinaglabanan Church. First built by Architect Luis Arellano in 1896, with the help of Mariano Artiaga and Martin Ocampo, the original structure was torn down during the war. It was Ramon Fernandez who rebuilt it at the end of the conflict, and again extended and renovated in 1951 by Parish Priest P. Hernando Antiporda and Architect Otilio Arellano.

Of course, a photo opportunity was a must upon arriving at the famous San Juan Bridge where both the 1896 revolution against the Spaniards and the Filipino-American War in 1899 began. It is also a stone’s throw away from Plaza San Juan where monuments of national heroes Jose Rizal, Andres Bonifacio and Emilio Jacinto proudly stand.

Aling Banang’s. A break at Aling Banang’s followed the first part of the city tour. The 80-plus-year-old Banang’s is considered as one of the oldest restaurants in San Juan and is famous for its flavorful pansit and halo-halo.

Pinaglabanan Memorial Shrine. The San Juan City Hall was also included in the bus tour in Barangay Corazon de Jesus. Quite impressive, this four-storey building even features a helipad on the top.

Adjacent to the city hall is the one-hectare historical Pinaglabanan Memorial Shrine, built to commemorate the first ever battle of the 1896 revolution against 300 years of Spanish oppression. This was known back then as El Deposito, the underground water reservoir built during the Spanish era to supply water around Manila.

Museo ng Katipunan. Museo ng Katipunan is the first and only museum specifically built to showcase the contributions of the Kataas-taasan Kagalang-galangang Katipunan ng mga Anak ng Bayan (Highest and Most Honorable Society of the Children of the Nation). This is the revolutionary movement founded by Andres Bonifacio in 1892, who is celebrated as the nation’s “Supremo.”

The mayor promised that though “short and sweet,” the “Celebration of Heritage Historical Tour” is just the beginning of future expeditions the San Juan Tourism Office will offer in their prosperous city.

“This is just the beginning,” she enthused. “Once we’ve readied the notable San Juan houses, there will certainly be so much more to see in this historic and culture-filled city of ours.”