His powerful son has done nothing to solve his murder

Yesterday was the 31st anniversary of the assassination of our national martyr, Ninoy Aquino, and again, photos of his son President Aquino with his sisters praying before the hero’s grave hog newspapers’ front pages.

Ninoy’s murder on August 21, 1983 was an event that changed the course of Philippine history.

I am still astounded at how its masterminds and conspirators were so daring and precise in their execution of the deed as to kill him in broad daylight. If the killers’ timing was just a few seconds late – or if the journalists with Aquino had been a bit bolder as to insist on following Aquino down the tube – the opposition leader’s killing could have been witnessed and photographed by foreign media who would have told the world about it.

As mysterious, though, as to who were the brains behind the assassination is the fact that Aquino's now powerful son, Benigno 3rd,  has done nothing to uncover who were behind his killing, as well as that of Rolando Galman, allegedly the actual trigger man who put a .357 mm. bullet into his head.

This is despite his four years as the most powerful man in the country that he has been able to remove the Supreme Court Chief Justice, incarcerate the former president on flimsy grounds, and have the entire Congress under his thumb.

Aquino is known to be vengeful against those who have slighted him in the most minor manner. This trait certainly doesn’t apply to his apparent nonchalance towards his father’s murderers. 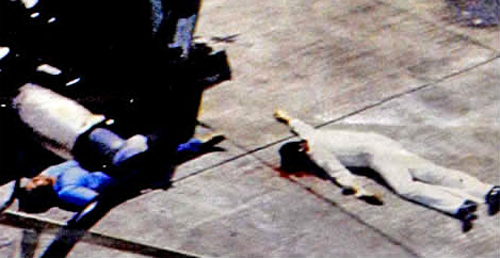 In contrast, the masterminds of the assassinations don't seem to have been idle, and have been determined to forever erase all trails of the evil deed that could lead to them.

In the early morning of May 7 this year,discharged Master Sergeant Pablo Martinez was killed in what initially appeared to be an accident along Roxas Boulevard.

An eyewitness claimed that an SUV Montero driven by one Henry Roque ran over him after he fell from his bicycle which the vehicle bumped.  The police initially concluded that it was purely an unfortunate accident.  His son Diomedes, also an Air Force sergeant, however, suspected he was murdered.

The latest report I’ve been able to dig up was a Philippine Star news item dated May 19: “Parañaque police investigators confirmed that Roque could no longer be contacted after three witnesses surfaced and claimed they saw his SUV deliberately run over Martinez after he hit the victim’s bike and fell down into the asphalt.”

Who is Martinez? He was convicted as one of the conspirators in Aquino’s assassination and had served nearly 30 years in jail for the crime. Since his release in 2007, and probably because he had become deeply religious, Martinez had been volunteering to disclose the brains of the murder. (An excellent documentary titled “The Assassination of Benigno Aquino, Jr.” produced by Kara Magsanoc-Alikpala, daughter of Philippine Daily Inquirer editor-in-chief Letty Magsanoc, shown on History Channel yesterday and every August 21 since it was produced in 2010, also focused on Martinez and his revelations.)

In 1995, he admitted his role in the plot, and testified that it was Galman who killed Ninoy with a single bullet to the head. He said it was he who escorted Galman to a motel to spend the night before the assassination.

Martinez alleged that former Philippine Constabulary Maj. Romeo Gatan, a businessman named Hermilo Gosuico, former Air Force Col. Romeo Ochoco, and Air Force Capt. Felipe Valerio were in that hotel to tell Galman what he would do the next day. The other 11 officers and soldiers made up the team that allowed Galman to get close to and shoot Aquino in the head, after which they gunned him down.

Martinez’ earth-shaking testimony, though, was  first narrated in a February 2006 article in the U.S. Time magazine and in an on-camera interview in 2007 by ABS-CBN’s Julius Babao with him right after his release from prison:

“I didn’t hear any direct order from him, but I asked them [the conspirators in the hotel] who was giving them the orders, and they replied, ‘Danding.’“

He was referring to oligarch Eduardo Cojuangco who had controlled until the last few years the giant San Miguel Corp. Martinez’s claims were recorded in a formal deposition and submitted to the Supreme Court, which had been asked to reopen the case. The Court, though, ruled that it didn’t qualify as “newly found evidence.”

“Valerio is among those who might be able to shed light, but to me, it’s Ochoco whom the government should ask because he was the one who ordered me to bring Galman to the airport,” Martinez said in 2007.

Capt. Valerio was the head of the 10-man team of the Aviation Security Command who collected Aquino from the China Airlines plane to the airport’s tarmac, where the former senator and then Galman were shot dead. Valerio and his immediate superior Air Force Col. Ochoco disappeared right after Marcos’ fall in 1986.

Aquino or his officials had done absolutely nothing to get in touch with Martinez or with the other 10 officers and soldiers convicted of the crime to convince them that they would be placed under his protection if they told everything they knew about the assassination.

Having given everything the Americans wanted, allowing them to have military forward operating sites here, couldn’t have Aquino asked them for a small favor of looking for Ochoco and Valerio, and extraditing them here to face justice?

One would have thought the martyr’s only son would use all the resources at his command as President not just to seek justice for his father, but also to shed light on what is one of the most ruthless but pivotal killings in our nation’s history.

Aquino’s seeming lack of concern over his father’s murder convinces me that either there is something deeply wrong in this person’s psyche, or that there is something terribly embarrassing in the assassination that has been kept so secret that even the victim’s powerful family has refused to uncover its mastermind.

Aquino’s mother Cory also seemed disinterested when she was president in getting to the bottom of her husband’s murder. However, this was mostly viewed as an understandable, even laudable, above-the-fray stance of the Saint of Democracy.

More cynical observers felt, however, that she was afraid to discover that the mastermind could be Cojuangco, her cousin, or that she even already knew this.

An interpretation kind to her claimed that if she had pursued Cojuangco for the crime, the oligarch could have joined and funded the many coup attempts against her rule, and that she chose to sacrifice her personal wish—to avenge her husband—for the sake of the country ‘s political stability.

The son certainly can’t make such justification now for his disinterest in finding out who ordered his father’s murder.

A big lacuna in our nation’s history remains to be filled, as mysterious as why his widow and the son hadn’t lifted a finger to expose who ordered the head of their family killed.

In the case of the also mysterious assassination of another president, the US’s John F. Kennedy, the trail had gone totally cold after nightclub owner Jack Ruby, who killed the alleged assassin Lee Harvey Oswald, died in prison four years later in 1967.

In Ninoy’s case, Martinez had provided enough leads to solve the mystery, and many of the soldiers convicted are still alive and can be persuaded to tell everything they know. They can even be convinced to disclose who reportedly has been generously taking care of their families financially in the 30 years they’ve been in prison.

The crimes’ planners—Col. Ochoco and Capt. Valerio, Martinez alleged—can still be tracked down. (Businessman Gosuico and Gen. Gatan reportedly had died several years ago by natural causes, although I have been unable to confirm this.)

How can Aquino keep wearing that yellow ribbon on his chest, when he has done nothing to solve the crime it signifies?

How can we be proud of a nation whose two presidents, one the widow and the other the son, had not bothered to bring justice to a hero who had declared that the Filipino is worth dying for?

Or maybe it would be more realistic to hope that Senator Ferdinand Marcos, Jr.—who aspires to lead this nation—would provide evidence to prove that it wasn’t his father who ordered Aquino’s murder, as most Filipinos believe the Senior did.