Glutathione: The body’s most protective antioxidant and best kept secret 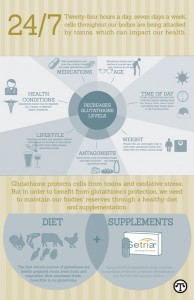 ASK anyone to name an antioxidant and even those with lowest awareness on the subject could mention one or two—perhaps, vitamin C, vitamin E or beta-carotene? Yet, one of the body’s most important protective antioxidants—glutathione (pronounced gloo-tah-thigh-ohne)—is never mentioned, even though it is naturally found in nearly all the cells, tissues and organs in the body. Glutathione is critical in protecting our cells from damaging effects of oxidative stress and toxins, both contributing factors to many fatal diseases. In fact, glutathione’s function in our bodies is so impactful that scientists refer to it as the “master antioxidant.” So, why is no one talking about this powerful nutrient, or encouraging the public to take vitamins with glutathione as an ingredient?

Science has provided several reasons why glutathione has yet to take hold in our everyday vernacular. First, the body is supposed to produce glutathione in sufficient quantities on its own. Second, there are small amounts of this nutrient in fresh (average of 6.2 mg/100 g) or frozen (average of 8.3 mg/100 g) vegetables-like avocadoes, asparagus, squash, potatoes and okra; fresh fruits—such as oranges, grapefruit, melon, strawberries and peaches; and smaller amounts in meats--(average of 5.4 mg/100 g) like pork chops, veal cutlet and beef steak; so the assumption has been that people can eat to replenish their body stores. And third, it has long been thought that supplementing glutathione orally through vitamin-type intake was ineffective at increasing body stores.