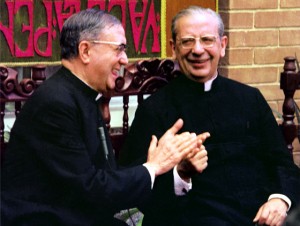 People from 80 nations are in Valdebebas (Madrid) for the beatification this Saturday afternoon (noon in Spain) of Venerable Alvaro del Portillo.

Groups are also expected from South Korea, the United Arab Emirates, Ireland, India, Macao, Nigeria, New Zealand, Russia, Trinidad and Tobago, South Africa, and of course the Philippines.  Some 1,600 Filipinos arrived in Spain early this week for the rites.

Madrid is the hometown of Venerable Alvaro, who was the first successor and the closest collaborator of the founder of Opus Dei, Saint Josemaria Escrivá.  After the beatification rites, he will be referred to as Blessed Alvaro del Portillo.

Bishop del Portillo was in the Philippines in January 22 to February 1, 1987 to meet the members of Opus Dei and visit the different apostolic and social projects established in the country.

Cardinal Sin hosted a dinner for him at Villa San Miguel, during which the late Cardinal thanked the Prelate for the apostolic work of Opus Dei in the Philippines, “spreading the message of the universal call to holiness among the lay faithful and bringing spirituality to the secular environments where the priests and religious cannot reach.”

The prelate held a number of general audiences at the Philippine International Convention Center and at the Cebu Plaza Hotel. These were catechetical gatherings where he spoke and answered questions on the spiritual life, the sanctification of work, suffering, Christian joy, family, and social responsibility.

Bishop del Portillo is remembered for his untiring service to the Church, his amiable character and his concern for those in need.

In a general audience in Manila after coming from Cebu, he made this observation, “My daughters and my sons, I have seen enormous wealth and enormous poverty.” He encouraged the faithful of Opus Dei and their colleagues to expand and put up more projects to equip people with livelihood skills.

The faithful of Opus Dei in the Philippines were then running technical training schools for those unable to afford a college education and were beginning a farm school in Batangas for children of farmers of high school age.

On his return to Rome, he sent an Italian delegation to Cebu to help set up a technical school similar to Centro ELIS, a successful social project in an outlying district of Rome. That technical school is now CITE (Center for Industrial Technology and Enterprise) in Talamban, which has graduated 3,000 industrial technicians from the Visayas and Mindanao since it opened in 1991.

It is recognized by the national government and industry as one of the leading technical schools in the Philippines.

President Corazon Aquino formally inaugurated CITE in February 1992. She also inaugurated the Dagatan Family Farm School in Batangas in August 1988, the first of its kind in Asia. Other projects inspired by Bishop del Portillo in the Philippines include the Banilad Center for Professional Development for girls in Cebu and DAWV (Development Advocacy for Women Volunteerism).

On July 5, 2013, Pope Francis signed the decree of the Congregation for the Causes of Saints approving a miracle obtained through the intercession of Bishop del Portillo, paving the way for his beatification.

The miracle was the instantaneous healing of a Chilean newborn baby, Jose Ignacio Ureta Wilson, in 2003. The boy suffered a massive hemorrhage and went into cardiac arrest. The medical team applied all the means for more than half an hour.

His parents were praying for his revival through the intercession of Bishop del Portillo. When the doctors had declared the baby dead, his heart started to beat again and the boy recovered completely.

For 11 years now Jose Ignacio has been living a normal life.

Bishop Alvaro del Portillo died in Rome on March 23, 1994 upon returning from a pilgrimage in the Holy Land. Pope John Paul II went to pray at his wake and spoke of “the example he always gave of fortitude and of trust in divine providence and his fidelity to the See of Peter.”

The beatification ceremony will be presided over by the Prefect of the Congregation for the Causes of the Saints, Cardinal Angelo Amato.

Filipino audiences can watch the beatification live from Madrid. at 5:30 to 8:30 pm today on EWTN and IBC-13.

The Mass of Thanksgiving celebrated by the prelate of Opus Dei Bishop Javier Echevarria will take place on Sunday September 28, at the same venue and time.

The Madrid events will thereafter continue in Rome, the city where Alvaro del Portillo spent the greater part of his life.

From September 29 to October 2 those who go to Rome will be able to visit the St. Eugenio Basilica (10, Belle Arti Street) where the body of the new blessed will be temporarily transferred for the veneration of the faithful.

Program of Events in Madrid and in Rome

Two Masses of Thanksgiving will take place on September 30 at the basilicas of St. John Lateran (11am) and at St. Mary Major (4.30pm) presided over by Cardinal Agostino Vallini, vicar general of His Holiness for the diocese of Rome and by Cardinal Santos Abril respectively.

On Wednesday, October 1, those who want to, can take part in the general audience of Pope Francis at the Vatican in order to show their gratitude to him for the gift of the new blessed for the Church.

On Thursday October 2 at 5 p.m. there will be a Eucharistic event at the St. Eugenio Basilica after which the body of the Blessed Alvaro will be returned to the crypt of the Prelatic Church of Our Lady of Peace.

Jeanne, my wife, one of our sons, Immanuel, and I are blessed for having had opportunities to be with this inspiring holy man. We pray to him every day.--Rene Q. Bas, using materials from the Opus Dei Information Office.