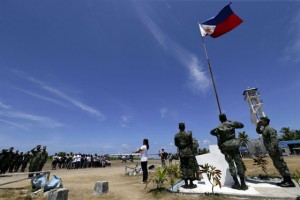 SHOW THE FLAG
Resident living in and soldiers deployed in Pagasa Island in the Kalayaan Island Group, better known as the Spratlys, hold a flag raising ceremony during the visit of military chief-of-staff General Gregorio Catapang Jr. on Monday.
AFP PHOTO