No new evidence to keep former president in detention 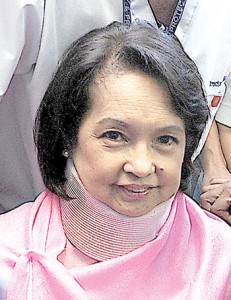 Former president Gloria Macapagal-Arroyo will soon be allowed to post bail in connection with an electoral-sabotage complaint filed against her by the Justice department.

At least 15 witnesses, including Unas, were presented during bail hearings for Arroyo.

In a two-page resolution dated September 22, the Special Division of the Court of Appeals denied a Justice department motion for reconsideration on its earlier ruling affirming a decision of the Pasay City Regional Trial Court (RTC) allowing Arroyo to post bail.

Judge Jesus Mupas allowed the former president to post bail after prosecutors failed to convince him that there is strong evidence against Arroyo.

The CA resolution penned by Associate Justices Elihu Ybañez, Isaias Dicdican and Victoria Isabel Paredes concurred with the lower court’s findings that the prosecutors who opposed the former leader’s bail petition had no new arguments to convince the court to reverse its ruling.

“We have carefully reviewed the arguments raised in the said motion for reconsideration and find the same to be mere reiteration of matters previously considered and found to be without merit in the decision subject of this recourse. We thus see no compelling reason to modify, reverse or set aside our previous decision,” the resolution read.

“For these reasons, the instant motion for reconsideration is hereby denied,” according to the appellate court.

In its March 24, 2015 decision, the CA said the government has a weak case against Arroyo.

The electoral-sabotage indictment against the former president was filed by Justice Secretary Leila de Lima and the Commission on Elections then headed by Sixto Brillantes Jr. on November 18, 2011.

The former president was accused of masterminding fraudulent elections in 2007 in conspiracy with then-Comelec Chairman Benjamin Abalos.

The court ruled that the only evidence of the Department of Justice and the Comelec against Arroyo is the testimony of Unas “whose credibility was seen by the trial judge to be tainted with doubt and insufficient to establish a strong evidence of guilt on the part of respondent Arroyo.”

“Consequently, in finding that respondent Arroyo’s evidence of guilt is not strong, the grant of bail now becomes a matter of right. Thus, it cannot be said that the trial judge acted in a capricious, whimsical or despotic manner when he issued the assailed orders granting bail to respondent Arroyo,” the decision read.

Further, the CA ruled that no grave abuse of discretion was found from the lower court in allowing Arroyo to post bail.

“Assuming arguendo that the respondent judge erred in evaluating the evidence during the hearing on the application for bail, certiorari will not lie. As stated earlier, no grave abuse of discretion may be attributed to a court simply because of its alleged wrongful appreciation of facts and evidence. In short, certiorari will issue only to correct errors of jurisdiction, not errors of procedure or mistakes in the findings or conclusions of the lower court,” it said.

This was the first case filed against Arroyo under the Aquino administration to block an alleged attempt by the accused to flee the country.

The Justice department used this case as basis to put the former president in the Bureau of Immigration Watchlist Order.

Court records show that since the case was filed in December 2012, only two out of more than 50 witnesses were presented during the trial.

Arroyo remains in detention over a plunder case filed against her by the Office of the Ombudsman for allegedly mishandling Philippine Charity Sweepstakes Office funds.