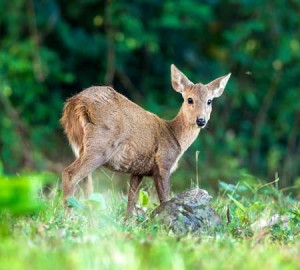 In 1980s, the Calamian Deer is considered a threatened and endemic specie of Palawan but now, it abounds Calauit Safari Park

Calauit is also a haven for more than 70 species of birds, of which 10 are endemic. Though this record is still initial as official bird census has never been undertaken, and wild birds in the island remains virtually unexplored.

Calauit Island was declared Calauit Game Preserve and Widlife Sanctuary (CGPWS) in 1976. By 1979, the government established the Calauit Project to propagate African animals and Palawan endemic wildlife species, preserve the entire sanctuary, including coastal and marine resources, develop the island as an education and conservation center in Asia, and to ultimately develop the island into self-sustaining operations.

In December 2008, CGPWS was renamed as Calauit Safari Park and the management was turned-over to the provincial government of Palawan, which has been tasked to promote it as recreation and eco-tourism destination.

Earlier, on March 2008, the National Commission on Indigenous Peoples (NCIP) issued a Certificate of Ancestral Domain Title (CADT) over the entire island in favor of Tagbanua Indigenous Cultural Community. The Tagbanuas have been long recognized as the main indigenous group in Palawan. The CADT enabled the indigenous community to have and to hold in ownership as their private but community property, to develop, control, manage and utilize collectively the said ancestral domain.

Currently, the “original settlers” are focused on brokering a deal with the provincial government that would enable the locals and animals to coexist peacefully.

The establishment of Calauit has its trade-offs, however.

Calauit Island has been chosen for its isolation, which reduced the chances of disease and poaching, as well as its resemblance to the African wilds. Around 40 percent of the parkland is an extended plain, leading to undulating hills and then mountains, which make up another 40 percent.

The government had to clear the island of inhabitants to give way to the animals. About 250 families who were settlers in the island were relocated in Halsey and Burabod in the nearby island of Culion.

The AFP report in 2011 mentioned of the clearing of bamboo forests on the island to make the plains resemble the savannahs of Kenya.

After the EDSA People Power in 1986, the settlers formed the “Balik Calauit Movement,” and aired their collective grievances to the new government. Some of the settlers tried to return to the Island but were driven away. In June 1987, their efforts to return have finally succeeded. Their presence in the island though, now numbering about 1,000, has caused some problems to the sanctuary in terms of poaching, kaingin activities, high mortality of animals, and disturbance to surrounding marine area.

For the year 2015 alone, as of August 2015, three zebras have been killed, two of them from gunshot wounds. Park employees recounted giraffes dying of wooden spears sticking out of their stomachs. The park’s water system was also tapped by the community, which has already established a school in the area.

With the absence of official records, however, available online data are a bit confusing as to the actual population of African and Philippine wildlife that are presently roaming in the island. In the census of 2005, the park had 480 African animals and about 1,390 Philippine animals. But AFP reported in 2011 that there were just over 100 African animals that roamed the island. In 2013, however, visitors’ accounts indicate about 880, with 23 giraffes, 38 zebras, and around 1,000 Calamian deers.

If only the annual census of animals from 1977 to 2015 can be made available, the data can easily show the survival rates of the animals, which ones flourished and which ones died out and when. The data will also be able to show the possible causes of the increase or decrease of the animal’s population.

Inbreeding is also a concern because no new animals have been brought in since the first ones arrived almost 40 years ago. Mundita Lim of the Biodiversity Management Bureau was quoted in 2011 about the need to do some genetic infusion, which means bringing in more African animals, to ensure the continued existence of the animals. One would easily notice that the giraffes and zebras look small if compared to their African counterparts.

Meager funds have cut down personnel from 300 at its peak during the administration of Marcos to only 21 at present, no wonder park structures remained dilapidated, vehicles are left unrepaired and rusting, and improvements have long been halted.

Surprisingly, travel to Calauit Island is not so popular, and many are not aware of the existence of the herds of African animals roaming freely in the island. The relative inaccessibility, the lack of promotion, and the high cost of travel may have something to do with the low interest of the people.

To reach Calauit Island, one has to travel by domestic plane for less than an hour from Manila to Busuanga-Coron airport.

The island is about 80 kilometers away from Coron town proper. It used to take up to three hours to get to Calauit, through rough and uneven roads. But road improvement efforts have already been made so the travel time is now reduced to two hours. Only about 30 more kilometers remain to be paved. A van may be rented out for P6,000 and it can accommodate 10 to 12 persons.

A boat ride awaits the visitors at the end of land travel, but the ride is just about 25 minutes of smooth sailing. The boat ride costs P400.00.

For an individual, the travel and cost may be quite heavy, but for a couple, a family or a group, it’s exciting and affordable, and very cheap to have a taste of Africa right in the country.

There used to be an open-sided truck that carried park visitors in and around the game preserve, but now the truck, like all other equipment, remained unrepaired and rusting. The park superintendent lends his private jeep, which can be rented for P1,000 by the tourists to go around the park. It is the only working vehicle in the island.

Park guides accompany the visitors to keep them at a safe distance from some animals, notably the giraffes and zebras who are known to throw sudden kicks from any side. So while the animals roam free, save for a few animals like the crocodiles, pythons, porcupines, etc., the visitors are hauled to a fenced area before they could feed the giraffes to keep them safe. From afar, the sight of tourists in a cage is a sight to behold as the usually caged animals are the ones walking freely in the park. The deers, however, can be touched while being fed.

The park guides are very much informed of the history of the island and the African wildlife, and can even answer all the relevant issues surrounding its establishment, including the conflict with the “original settlers.” Surprisingly, the park staff could even identify the giraffes by their names. They can say which giraffe is Mylene, Isabel, Hermina, Athena, Jacky, Gerald, Miller, Trisha, Beatriz, Troy, Ted, Jim, etc. One is even named JCA, and when told that the name sounds like the initials of the provincial governor, everybody laughed.

On the way out of the park, one can buy souvenir T-shirts emblazoned with zebras or giraffe graphics at the Information Center, but no receipt is provided. The absence of receipt was initially tolerated by tourists who thought that the sale is for the benefit of the park workers’ cooperative, but they were quite surprised when told that the souvenir store was owned by the park manager’s wife, and managed by the wife of his son, the jeepney driver.

The park does not lack for thrills, as the sight of real wildlife from Africa is as exhilarating as any theme park ride (even more!). And the Calauit Safari Park of today can have its long-deserved grandeur tomorrow.

The dream is to have safari-themed vehicles pick people up from Busuanga Airport, or from Coron proper, with safari-dressed drivers ferrying visitors to and from Calauit Safari Park—the Philippines’ own African Safari slash Jurassic Park.

The visitors are ushered to the Information Center to be briefed intensively as to what they can expect during their tour. A guided tour to a museum-cum-gallery follows where the guests are treated to a multi-media presentation of the park through photographs, videos, sounds and lights, and all other modern interpretations of the habitat and wildlife that are present in the island. The park’s history is presented, including the issues, concerns and challenges that are being encountered.

The visitors are then given safari-themed rides that gives them an up close encounter with African wildlife and Philippine wild animals. The vehicles glide through the savannah as zebras and giraffes come out in the open to graze and feed. Viewdecks and platforms will also be available for guests to gather around and observe the wildlife at a height, and also have an opportunity to take photos.

Appropriately, the park amenities will be safari-themed, such as concession stands, souvenir shops, photo booths; and everything can be found at the main area. Scopes and binoculars are rented out for bird and animal watching.

The park can also be a venue for conferences, seminars and workshops, especially if the events have something to do with wildlife, conservation and eco-tourism. It is a perfect venue where both conservation and eco-tourism are showcased, and where the rights of the state (which owns the wildlife and undertakes the project) and the rights of the people (who owns the island as their ancestral domain) are perfectly observed in harmony for the common good.

Not only the African wildlife is featured in the park, but also Philippine endemic wildlife, especially Palawan indigenous animals, not caged but roaming around freely.

The Calauit Safari Park can (and should) be one of the top destinations in the country’s last frontier, alongside the Puerto Princesa Underground River, and the Tubbataha Reefs in Cagayancillo. Nowhere else in the region can African wildlife flourish and provide concrete proof that there is hope for animal conservation.

It will not just be a taste of Africa. It will be wild Africa in our midst.

(Alain Pascua is the co-founder and vice president of the Wild Bird Photographers of the Philippines and a member of the Board of Directors of Earth’s Rights, People’s Rights, a non-government and non-profit organization focused on the environment. He is also part of the global team of wildlife authors and photographers of Focusing on Wildlife website at www.focusingonwildlife.com whose mission is to promote wildlife conservation by changing attitudes towards nature and helping people imagine wildlife and humans living in harmony. He is one of the Species Champions in the said website. Pascua is also a regular bird, nature and conservation photography workshop lecturer and photo contributor of the Biodiversity Management Bureau of the Department of the Environment and Natural Resources. His bird and wildlife photographs may be viewed at www.alainpascua.com and www.facebook.com/alainpascuaphotography.)