How to slash crime in six months

First, don’t get all worked up over campaign hyperbole. Those disdaining Davao Mayor Rodrigo Duterte’s pledge to resign as president if he can’t eradicate crime in three to six months, should recall Benigno Aquino 3rd’s campaign and presidential promises.

As candidate, Aquino said he would prioritize the Freedom of Information Act. Yet as president, he has stalled FOI till today. Year after year he boasted of impending rice sufficiency. But we still import millions of tons annually, most of it smuggled.

And remember his 2013 remark to have himself and Transportation Secretary Jose Emilio Abaya run over by commuter train if the Light Rail Transit extension to Cavite wasn’t completed last year?

With LRT’s Cavite line not even started last December, Presidential Communications Secretary Sonny Coloma just said Aquino’s remark was “an aspirational statement [which] should not be taken literally.”

Still, Aquino enjoys high trust rating. Well, if one allows a sitting President such leeway with his words, why not an aspiring one?

Coloma also said: “The President was speaking with a sense of urgency when he announced his desire to see the project ‘within two years’.” Ditto Duterte’s half-year deadline to wipe out crime.

Lawlessness — the country’s No. 1 problem

What’s good about the motorcycle-riding mayor’s bold pledge is that it has focused long-overdue attention on lawlessness. It’s our most pressing problem today and one of two top public concerns along with poverty, in Pulse Asia polls. Yet only Duterte has made it top priority.

Make no mistake about it: The explosion in crime, contraband and corruption under Aquino — perpetrated by a demonic cabal of criminal syndicates, big-time smugglers, and sleazy politicians and bureacrats — destroys and threatens the life, limb, and livelihood of millions.

Crime more than tripled between 2010 and 2014, with further surges last year, based on the 46 percent rise in January-June 2015 reported by the Philippine National Police Directorate for Investigation and Detective Management, a key PNP data unit.

Hence, in the past three years alone, an estimated 3 million crimes have been recorded, with many thousands more not even reported to police.

Assuming each crime has just two victims on average, that’s 6 million Filipinos directly affected. Add three kith or kin per victim, and a quarter of our 100-million population who suffered from or personally knew about criminal acts. Plus many millions more seeing lawlessness on the evening news and the morning paper.

No wonder Duterte leads surveys despite his much smaller campaign fund and network. 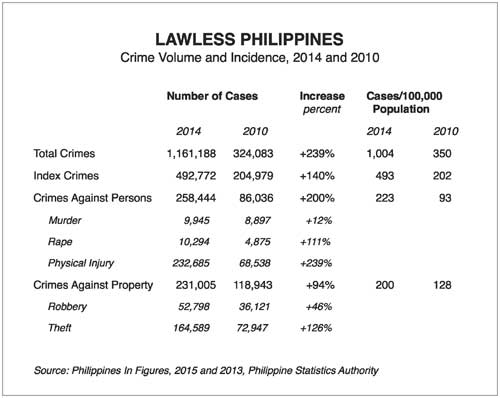 Belatedly, Senator Grace Poe and Vice-President Jejomar Binay are trying to counter Duterte’s monopoly on the anti-crime message. In her latest ads with adoptive mother Susan Roces, Poe now says she will fight crime and graft. And in an interview yesterday, Binay told citizens not to vote for “executioner” Duterte.

How Aquino has fueled organized crime

Those campaign moves by Duterte’s rivals show that his six-month deadline to eradicate lawlessness has won widespread support. But having slashed crime in one city, the mayor himself knows doing it nationwide isn’t quick and easy.

Certainly, zero crime and sleaze is impossible, but it can be drastically reduced, especially by reversing the growth momenturm of lawlessness under Aquino.

Back in 2010, crime actually dropped, from half a million incidents the year before to 324,083. It seemed to continue declining in 2011 and 2012 — until police chiefs were caught fudging statistics. Based on corrected figures, lawlessness actually soared.

The next leader should aim to reverse that escalating trend. How?

To find solutions, figure out root causes first. What has fueled the explosion in lawlessness is the massive funds flowing into lawless groups from the trebling of jueteng and smuggling under Aquino — enabling crooks to expand manpower, faciltiies, weaponry, and government connections.

Take illegal gambling. Aquino could have wiped it out by letting then Local Government Secretary Jesse Robredo use the police to replicate nationwide his eradication of jueteng in Naga City when he was mayor.

But Aquino took the PNP away from Robredo and put it under his shooting buddy, then Undersecretary Rico Puno, whom gambling fighter Archbishop Oscar Cruz accused of being an “ultimate recipient” of jueteng payoffs.

With illicit lotteries spared from crackdown, syndicates flourished on gaming gains. Aquino did the same with contraband. As with jueteng, he had the right man to stop smuggling: former tax and customs commissioner Guillermo Parayno.

Aquino interviewed him for the customs job, but gave it to others, then looked away as smuggling skyrocketed. The undeclared or underdeclared value of imports tripled from $7.9 billion in 2009 to $26.6 billion in 2014, based on IMF Direction of Trade Statistics. DTS compares exports to the Philippines reported by our trading partners, with imports tallied by BoC. The difference is smuggling.

And when more than 2,000 containers disappeared in 2011, Aquino never had it investigated, though it was so easy to pinpoint who kept releasing cargo boxes after hundreds vanished. Instead, when one deputy commissioner raised the alarm after 600 were gone, Malacañang suspended him on graft charges.

Estimated at P4 trillion under Aquino (see https://www.manilatimes.net/smuggling-utterly-out-of-control-under-aquino-regime-p4-trillion-in-last-five-years/212920/), smuggling funnels more billions to lawless groups. Plus it lets guns and drugs flood in, as his 2013 State of the Nation Address admitted. Imagine the firearms and narcotics one vanished container can carry.

(The second part will run on Thursday.)