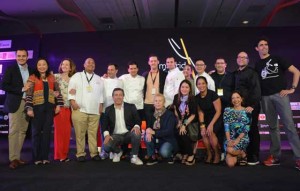 From April 7 to 9, the SMX Convention Center at Mall of Asia Complex in Pasay became every epicure’s go-to place for the second edition of Madrid Fusion Manila (MFM), the only Asian edition of the most important international gastronomy congress in the world.

With the theme “The Philippines and Spain: A 300-year Gastronomic Journey,” aspiring and professional chefs, and food business owners and connoisseurs, among others, from around the globe were able to hear from 20 world-renowned chefs, most with Michelin-star under their name, that came from Asia, Europe and the USA.

For the themed lunch of MFM’s first day, the spotlight went to Luzon and its “Panlasa” dishes that basic that feature the basic tastes of sweet, salty, sour, bitter and savory.

Breakfast food from the Visayan region were feasted for Day 2’s themed lunch.

With the success of MFM 2016 in terms of increased attendance and participation on the part of presenters, delegates, guests, and exhibitors can Manila expect MFM 2017?

“It is in our intention to do everything possible to announce Madrid Fusion Manila 2017 soon. We believe MFM to be such an important part of Philippines’ tourism calendar and a permanent part of the Filipino culinary enthusiasts’ happiest, most exciting encounter with world-class gastronomy,” Tourism Secretary Ramon Jimenez said in statement.