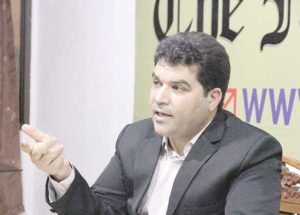 LOOKING FOR SCIENCEBASED TIES Dr. Abbas Ghanbari Baghestan, Scientific Counselor and Director of Iranian Students in East Asia, discusses how universities in the Philippines and his country can forge ties based on “Scientific Diplomacy.” PHOTO BY ABBY PALMONES

Iran is seeking to forge ties between its top universities and those in the Philippines through “scientific diplomacy” that the Middle East country believes will facilitate the exchange and development of scientific knowledge between the two countries.

In a roundtable with The Manila Times on Friday, Dr. Abbas Ghanbari Baghestan, scientific counselor and director of Iranian Students in East Asia, said “scientific diplomacy” can last longer than diplomatic ties forged from politics or religion.

“Politics can be changed, religion can be different from one country to another country, social norms can be changed. But science, there is a standard at the global level that all the universities, scholars, researchers believe in, and that cannot be changed,” he added.

Baghestan said he is pushing for universities in Iran and the Philippines to forge ties based on cooperation in science.

“Recently, the Ministry of Science and Research and Development introduced the concept of Scientific Diplomacy. We consider science and research and academy as a basis for relationships between nations,” he added.

He did the same in Indonesia and Malaysia, where his office is currently based.

Besides pushing for science-based ties with East Asian countries, Baghestan’s office in Kuala Lumpur also takes care of Iranians who are studying in universities in the region.

The diplomat noted that when it comes to science and technology, Iran is among the top in Asia.

“In 2015, we were No. 16 worldwide in science production,” he said, referring to the number of scientific or research papers published in scientific journals accredited by the International Scientific Indexing (ISI), number of patents generated and citations to Iranian scientific/research papers, among others.

He said in the Middle East, Iran is No. 1 when it comes to science production, while it is No. 5 in Asia behind Japan, China, South Korea and India.

Baghestan noted while China is No. 2 in Asia, it has a population of over a billion compared to Iran’s 80 million.

The Middle East country has 2,500 higher education institutions of which 500 are public or supported by the Iranian government.

Iran also has 36 technology parks where inventions and innovations can be commercialized, and 67 scientific journals under ISI.

The Philippines only has one scientific journal under ISI while Malaysia has three.

“It is a very good opportunity for Philippine researchers and scholars to publish [their scientific papers/researches],” Baghestan said, referring to Iran’s 67 scientific journals under ISI.

He added that publishing papers in scientific journals in the United States and Europe that are under ISI can be more costly for the scientists and researchers in the Philippines.

According to Baghestan, Iran can offer scientific knowledge, technology and know-how in biotechnology, agriculture and space exploration.

He boasted that Iran is one of the few countries in the world that can independently launch satellites into space.

Iran is planning to send a man into outer space in 10 years.

Iranian universities have forged ties under scientific diplomacy with their counterparts in Russia and France, among others.

English is used as a medium of communication in the science community of the Middle East country, including in its universities.