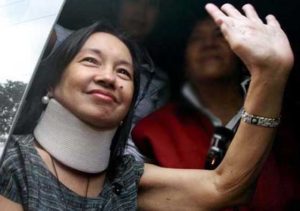 The Supreme Court acquitted former President Gloria Macapagal-Arroyo of plunder in an 11-4 vote on Tuesday that is expected to lead to her immediate release after a four-year detention, her lawyer said.

Lawyer Raul Lambino said in a televised interview the ruling by the high court is immediately executory.

The high court granted Arroyo’s demurrer to evidence in connection with the plunder case involving her alleged misuse of intelligence funds of the Philippine Charity Sweepstakes Office (PCSO).

In a demurrer to evidence, the accused pleads for the dismissal of charges and argues that the prosecution had presented insufficient evidence.