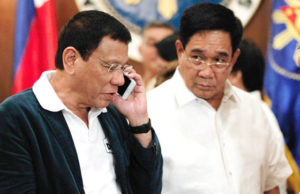 Presidential peace adviser Jesus Dureza also disclosed that “there are efforts” from Misuari to secure the release of the Norwegian being held captive by the group.

“He’d like to do coordination with our military forces on the ground because they’d like also to help in addressing the criminal acts committed by the Abu Sayyaf Group,” Dureza told reporters as he confirmed that the ASG kidnapped five more Malaysians in Lahad Datu, Sabah on Monday afternoon.

According to Dureza, the President called Misuari following the approval of the government’s roadmap to peace with rebel groups.

The phone conversation on Monday night, according to Dureza, was “very open.”

“After the President approved the roadmap which included the Bangsamoro, he asked that a phone call be made to chairman Nur Misuari because we knew that chairman Misuari has been wanting to talk to him,” he said.

“The conversation was very open... It was something very warm between two friends greeting each other,” he added.

But Dureza refused to give more details about the phone call.

Meanwhile, the peace adviser clarified earlier reports on the meeting set between Duterte and Misuari.

“He [Misuari] is still facing arrest due to the Zamboanga incident and the warrant of arrest is still active.We cannot deal with him officially because he is technically still a fugitive of justice,” Dureza said.

Misuari is facing rebellion charges over the 20-day Zamboanga City siege in 2013 that led to the death of 200 people and the displacement of thousands of others.

Dureza said Misuari’s lawyers can ask for a review of the case.

“So, we will see if that review will result in the suspension of the effects of a warrant. We will see but that is going to be the route that will be taken,” he said.

“As a matter of fact, in order to disabuse the minds of many who had already been massing in Sulu saying that the President is coming to meet with him, we will have to wait until that procedure is complied with. That we have to deal with the effects still of a warrant. It is only when a warrant is no longer in the way that this can proceed, accordingly,” he added.