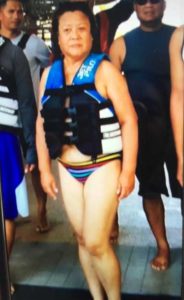 EXPOSED Leila de Lima, then secretary of Justice, is surrounded by her bodyguards during an outing in a Batangas resort.

De Lima has admitted to being close to her former driver, but denied that she tolerated illegal drug trade and pocketed money from drug syndicates. The senator even said she was wiling to resign from her post and be shot in front of the President if there was authentic evidence against her.

The lawmaker has called on the President to spare her former driver-bodyguard from personal attacks, saying he had gone into hiding because of threats to his life since Duterte assumed the presidency.

The President would have none of de Lima’s pleas.

“As the President, I got this information … as a privilege. But I am not required to prove it in court. That is somebody else’s business. My job is to protect public interest. She’s lying through her teeth,” he said.

Instead of appealing for her former driver-bodyguard, the President urged the senator to reveal her former employee’s sources of funds for the construction of a house in Urbiztondo, Pangasinan.

“Senator de Lima was there [in Urbiztondo] so many times. First during the house blessings, and on weekends you’re with your driver. Everybody knows,” Duterte added.