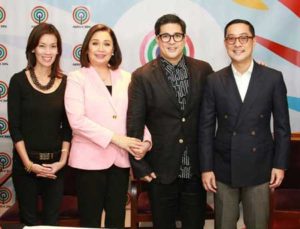 “It took me weeks to think about it--we prayed about it. What I said before that I kind of got tired of working, and I was burned out already [was all true]. So I lived a normal and regular life, and I’ve been really having fun with it,” he added.

“But then one day, someone pointed out that I was only 46—well, at that time; I just turned 47—and that it’s too young for me to retire. I realized I wanted to do more, but didn’t know how. I didn’t know how to come back again. I mean, what would I do? What I only know and what I love to do is making films.”

Serendipity then stepped in and he received an offer from ABS-CBN to be part of Pinoy Boyband Superstar. And so did his wife, former beauty queen and actress Charlene Gonzales and their good friend Lea Salonga who convinced him to say yes.

“I got a message from Lea and then my wife that they heard the news about the offer. So I said, ‘Maybe this is it.’ [The show] is light, it’s different, and there isn’t so much pressure because there’s four of us [on the panel]. I figured maybe this is the right time for me to come back,” he said.

As he begins work on Pinoy Boyband Superstar, Muhlach’s preparations comprises mostly of losing weight and giving back to an industry that has been so good to him.

“Preparing for this comeback [through this project] is something I don’t take too seriously. First and foremost, I started [addressing] my weight issues, which is ongoing. So hopefully next month, when we get to the second part [of the show], I’ll be thinner. It’s hard [to stay fit] when you’re living a regular life. Now I have to wear suits, but it ’s all fun,” Muhlach laughed.

Together with Vice Ganda, Sandara Park and Yeng Constantino, Muhlach’s task is to discover the most versatile and musically talented male contestants to form the country’s next biggest boyband.

“I’m just happy to do the show because it’s not focused on me. This time, you get to give back because you’ll mentor these kids—let them see what is destined for them and help them start their career. They will also face what I experienced so it’s nice to be part of something like that,” he explained the second part of his preparations.

Asked what kind of a judge he will be on the show, Muhlach replied, “I don’t know my judging style really. It’s just going to be me and we’ll take it from there. As real as it gets. They say that the best way to be critic or to judge people is just to be honest. The show is centered on those young boys, and we’re just there to mentor a little and to give advice.”

Muhlach’s illustrious career as one of the most distinguished actors in the country began when he was just seven years old. His popularity skyrocketed after starring in the iconic 1980s film Bagets, which made him the ultimate matinee idol.

In the years that followed, Muhlach also earned the reputation as one of the most versatile actors in the industry who ventured into drama and comedy via box-office films such as Basta’t Kasama Kita, Sana Maulit Muli, All My Life and sitcoms like Oki Doki Doc.

The defining legacy of his career includes being one of the few top leading men in showbiz who was teamed up with the most sought-after actresses in the industry—from his teen love team with Janice de Belen, all the way to the consummate Vilma Santos.

According to Muhlach, he is open to the possibility of returning to his real love in films.

“Movies? I hope so. I’m taking it one step at a time. I would love to do a film with Star Cinema. My passion for doing films will never fade, and ABS-CBN has always known that even in 2010 when I was still here,” he said.

More than the leading lady and the production team, he is primarily looking for a good story to get him back on the set again. Apparently, even during his hiatus, Muhlach would continually get scripts offered to him but none of them excited him.

“Let’s see what happens. I’m still looking for that perfect script,” he smiled.

Muhlach was last seen on the big screen in 2011 with Angel Locsin in Star Cinema’s In the Name of Love.