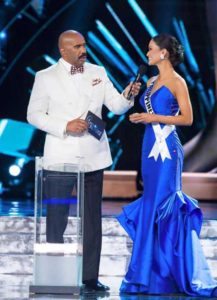 Miss Universe Pia Wurtzbach captions this post on the pageant’s Facebook page: ‘#TBT to the night that changed my life. Steve Harvey let’s do it again and change someone else’s life’

TOURISM Secretary Wanda Teo is counting on President Rodrigo Duterte and the Filipino people to forgive American host Steve Harvey for his epic blunder in announcing the wrong winner at the last Miss Universe pageant so that the latter can fulfill his contract to emcee the January 2017’s coronation night.

Teo admitted during the Meet the Press in Malacañang on September 1 that President Duterte had expressed his hesitations on the likelihood that Harvey will host the 2016 Miss Universe coronation night scheduled for January 30 at the Mall of Asia Arena. This despite the Department of Tourism (DOT) chief’s explanation to the President that said she explained Harvey has a five-year contract to emcee the pageant.

Harvey had repeatedly apologized for the mistake of announcing Miss Colombia as the 2015 Miss Universe, before he realized that Bb. Pilipinas Universe Pia Wurtzbach was the adjudged winner.

“Miss Universe Pageant is four months away. That’s more than enough time to assuage President Duterte about his hesitation on Mr. Harvey’s hosting the event. I’ve known him for many years as our Davao City Mayor with a big heart for well-meaning people like Mr. Harvey, who did not hesitate to correct his mistake,” Teo said.

In an interview with DZMM’s Noli de Castro, Teo also pointed out, “I will personally speak with the President and may even ask the help of Pia to convince him to give Mr. Harvey the chance he deserves.”

She went on to say, “The reigning Miss Universe, our very own Pia Wurtzbach has the magnanimity to appreciate the way Mr. Harvey stepped up to redeem himself. I’m counting on the same sense of forgiveness and class-act among Filipinos.”

In the Miss Universe Organization Facebook page, a photo of Wurtzbach and Harvey is posted showing the question-and-answer portion of 2015 Miss Universe, captioned “#TBT to the night that changed my life. Steve Harvey, let’s do it again and changed someone else’ life.”