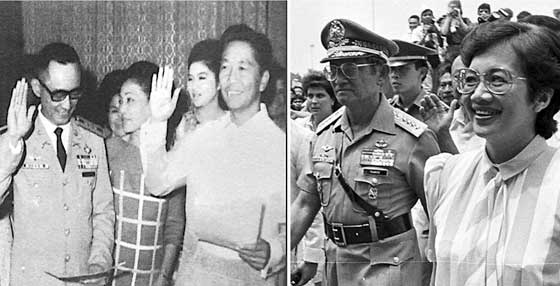 Man for all seasons? Left, photo from Presidential Museum with caption: “In January 1972 at the height of the First Quarter Storm of the angry Filipino youth, Brigadier General Ramos was appointed Chief of the Philippine Constabulary -- his first, last and only assignment with the PC, having spent his first 20 years in the Army.” Right, with his second boss, February 1986.

Of course, a faction of the military led by Defense Secretary Juan Ponce Enrile and Ramos rebelled in 1986 against Marcos to oust him with the help of the US. But it’s certainly very inaccurate to say that the entire AFP and PC were against Marcos even at that time. From the highest-ranking general to the lowest ranking soldier, the military were ecstatic over martial law. Hasn’t Ramos noticed that not a single retired general, or military or police of any rank has protested Marcos’ burial at the Libingan?