Pacquiao too strong for Horn – McTavish

Veteran international boxing referee Bruce McTavish believes that World Boxing Organization (WBO) champion Manny Pacquiao would be too much of an opponent for Australian Jeff Horn. Negotiation is underway for the two boxers to fight sometime in April.

McTavish, a native of New Zealand, believes that the boxing skills of the former schoolteacher is still raw compared to Pacquiao’s level of talent. Horn holds a 16-0-1 win-loss-draw record with 11 knockouts against Pacquiao’s 59-6-2 with 38 knockouts. 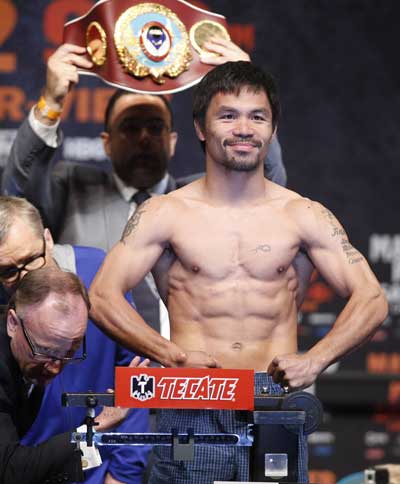 “I was one of the judges when I saw Jeff Horn won by knockout against an African opponent during an IBF (International Boxing Federation) event last December. To tell you the truth, Horn is a very nice kid, former schoolteacher, clean cut, a good boxer, but he has no real talent. He may have won by a knockout against the other guy and did it pretty well, but I think he’s too young and raw for Manny,” McTavish, 76, told The Manila Times on Tuesday via phone interview.

The boxing judge and referee was pertaining to Horn’s knockout win against Ali Funeka last December 10 in Auckland, New Zealand.

McTavish has been a resident of Angeles, Pampanga for 50 years now. “My puso (heart) is 100 percent Filipino because I’m already living here in Angeles for 50 years.”

“Manny will knock him (Jeff) out three to four rounds and I guess it’s a mismatch. It’s a shame. Horn has a good future but he’s not yet ready for somebody like Pacquiao—too premature. Pacquiao is a freak of nature. He only needs six weeks to get into a tough shape and that’s very fast.”

“Crawford is on his peak right now at his young age. It’s more than a competitive fight for Manny at this stage because Crawford is also much younger,” he said.

McTavish said the only chance for Horn to win is to keep Pacquiao at bay during the fight.

“Horn needs to focus on his jab, but I think it is not going to happen,” he said.

“That fight, if it will formally push through, is definitely good for Australia because Manny is known all over the world wherever he goes.”