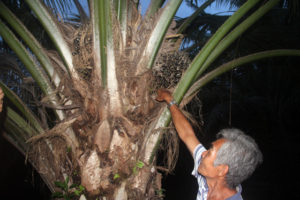 PUERTO PRINCESA, Palawan: A long stretch of land, as far as the eye can see, on the southern tip of Palawan, is now the preserve of massive palm plantations.

This is not a scene straight out of a disturbing film but it is a reality that reflects the growing threat to the country’s last frontier, declared a Unesco Man and Biosphere Reserve in the 1990s.

But the moderate climate and rich soil of Palawan ironically made it the ideal hub for growing palm trees to the detriment of local coconut farmers.

Ten years ago, Amirul Marinse, 68-year-old member of the Pala’uan tribe and former coconut farmer in Iraray Sofronio, Espanola, Palawan rented out his seven hectares of land to the Agumil Company for P1,000 per hectare annually with the agreement that aside from the rent, after three years, there would be profit-sharing from the palm oil harvest on the land.

But to this day, Marinse told The Manila Times, there has been no such profit-sharing and he found it frustrating that the contract is for 30 years.

He said he wishes to be to freed from his contract with Agumil but knows it is not possible.

A decade after signing the contract, Marinse added, he cannot even afford a carabao-drawn carriage.

“We were promised that we can have a big house or even buy a car in one year [with the profits] from one hectare alone. Unfortunately, we cannot even buy food and medicine for my maintenance,” he said.

Palm oil comes from these trees that are native to West Africa but also thrive in any hot and wet tropical climate.

Today, palm trees are massively grown in Asia, Africa and the Americas but the biggest palm plantations are in Indonesia and Malaysia.

His older brother also rented out his 1.5-hectare coconut farm to Agumil for a 30-year period but Asil opted to remain a coconut farmer.

He said these conversions had a very bad impact on indigenous communities as rapid expansion of the palm plantations is wreaking havoc on their lives as these are destroying their farmlands and the rainforest.

Asil added that the secondary forests in Palawan were also cleared, the massive deforestation giving way to palm plantations to take the place of numerous coconut farms.

Hunting grounds of the indigenous peoples (IPs) also disappeared and with it the forest products on which they had depended for survival.

The plantations, according to the IPs, are endangering the biodiversity, water resources and soil since the local community are prohibited by palm oil firms from planting vegetables, camote (sweet potato), cassava and other root crops.

Palm oil is used by multinational companies like Nestle and Kellogg’s for manufacturing a long list of food products and Unilever for its personal care and beauty products.

The huge demand for palm oil continues as it is the most widely produced vegetable oil in the world and is a major ingredient of candy bars, soap, biofuel and lipstick, among many others.

John Mart Salunday, 36, Tagbanwa tribal chief and concurrent president of Nagkakaisang Tribu sa Palawan (NTP), said during a seminar on environment reporting initiated by the Philippine Press Institute (PPI) that locals were lured to convert their coconut farms and plant palm trees instead because of rosy promises of rapid development and economic opportunities.

Apparently, it was just a ploy as the entry of palm oil companies caused divisiveness among the tribesmen and brought to the surface their opposing sentiments on the issue of land use.

This supposedly is threatening the biodiversity and water supply here as well and has fueled landgrabbing.

Voices of discontent are rising as regrets mount with the enormity of the trade-offs for the farmers who leased their lands for 30 years.

Palm trees were introduced in Palawan in 2005.

Today, the bulk of palm plantations and operations are under the Palawan Palm and Vegetable Oil Mills Inc. and its sister company Agumil Philippines Inc., Salunday said.

Both companies were established through joint ventures among Filipino, Singaporean and Malaysian investors.

Over 6,000 hectares of protected land have already been cleared and planted to palm trees.

To date, some 20,000 hectares of land have been set aside for palm plantations in Palawan.

The Philippine government has described the palm tree as the tree of peace or economic growth and regards it as “overall the best environmentally friendly option for eradicating rural poverty while reducing dependence on imported edible oils.”

Salunday said the government claims that it will only allow idle and underdeveloped land to be converted to palm plantations.

He added that the expansion of palm plantations in Palawan province was boosted by President Rodrigo Duterte opening the door to palm oil producers and encouraging the development of 80,000 hectares in the country for palm plantations with Malaysia as target market for locally produced palm oil.

The municipalities of Brooke’s Point and Sofronio Española in southern Palawan have emerged as the core of the industry.

Data shows that around 40,000 workers are now engaged in this new sector, with six towns in Palawan--Aborlan, Bataraza, Brooke’s Point, Rizal, Quezon and Sofronio Española--being the hub of the palm plantations.

But what was initially regarded as a sunshine industry is turning into a cross too heavy to carry for its farmer cooperators.

Salunday reiterated that the entry of palm oil companies has caused divisiveness among the tribesmen with their opposing sentiments on the issue of land use.

The agriculturist said the contracts that the farmers entered into with the oil palm companies provided no conversion of coconut plantations and no opening of virgin forests.

Alberto Santos, another farmer, said men with chainsaws have cleared what in his estimate covered 50 hectares, only to find out later that the project was to stretch to 500 hectares.

Farmer Leopoldo Tuba was also saddened by the thought of any coconut tree going down because it offends their cultural sensibilities.

Palawan currently has 35,000 coconut farmers and 99,000 hectares of land here are devoted to copra production.

The palm oil plantations also threaten the important craft of weaving with the leaves of the buri plant that grows wild in their area.

These plants were cleared to make way for the palm trees.

The realization that palm trees yield only oil for fuel and cooking makes the coconut tree even more precious now to the Palawan farmers.

Salunday said the tribes are suffering from the environmental degradation brought about by the presence of the palm oil plantations.

“Our voices have been drowned in the wilderness as the local officials in Palawan continue to strongly support the expansion of palm plantations. There is the issue of landgrabbing, environmental impact and pollution of the water sources. All of these are aggravating poverty here as the Agumil corporation is not allowing the farmers, mostly indigenous peoples, to inter-crop to support their day-to-day subsistence,” he added.

“We are happy that the PPI seminar on environment reporting was held here because our plight can be heard now. Through your help, we are seeking a legislative inquiry so Congress can take action on the pressing issues in Palawan,” Salunday also told The Manila Times.