THOUSANDS trooped to Rizal Park on Sunday afternoon to demand the resignation or impeachment of Vice President Maria Leonor “Leni” Robredo, with some of President Rodrigo Duterte’s most die-hard supporters taking turns bashing Robredo for supposedly ruining the country’s reputation before the international community.

The “Palit-Bise” (“Replace the Vice President”) rally tagged Robredo a ‘traitor” and a “shame” over her video remarks criticizing the President’s anti-drug war in a side meeting of a United Nations anti-narcotics conference last month. 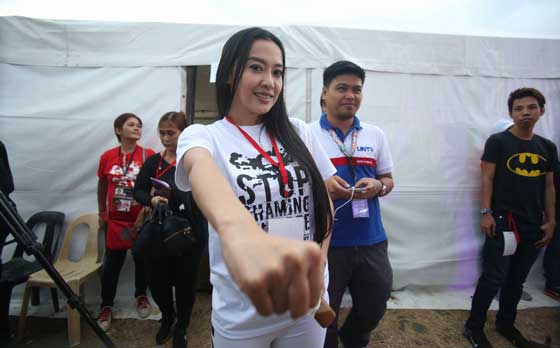 PDP Laban is the ruling party led by President Duterte.

“In the event that Leni is impeached, these international media will make Duterte look like a dictator. Impeachment is delicate so we have to make it clear that the people want to impeach Leni,” Nieto said.

Duterte has refused to throw his support behind the Palit Bise rally and had assured Robredo that he did not want her impeached.

A Robredo spokesman, lawyer Ibarra Gutierrez, called on the President’s supporters to appeal to the President, not the vice president.

“Its clear that during their last encounter, the President and the vice president are focused on doing their jobs and they respect each other’s mandate,” Gutierrez said in a statement.

“The supporters of the President who don’t share his sentiments should explain themselves to the President instead,” Gutierrez added.