The ‘adventure of a lifetime’ for Coldplay fans 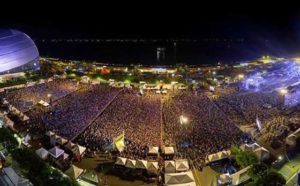 “Look at that crowd, people, that’s how you do it,” he exclaimed.

“I hope you’re having a great time. We’re so happy to be here. It’s such a thrill, it’s such an honor, and I wanna thank everyone who has been so welcoming and so kind to us for just making us feel amazing.”

Martin reportedly biked around the concert grounds in the afternoon, catching fans by surprise before preparing for the concert.

In a single night, Coldplay proved that they can please both new and long time fans with a good mix of earlier and later hits.

The band played songs from their first three albums, during which time they were considered as an alternative rock music group. This set included “Don’t Panic” (2000), “Clocks” (2002), “In My Place” (2002), and “Viva La Vida” in between their current zesty pop and anthemic tunes like “Paradise,” “Magic,” “Hymn for the Weekend,” “Adventure of A Lifetime,” “Something Just Like This,” “Sky Full of Stars,” and “Up & Up.”

They also threw in David Bowie’s “Heroes,” among the 21 songs they played in the show, as a tribute to the late British music icon who passed away in 2016.

Moreover, Martin proved why he is one of the most adored front men of his generation. He had a masterful command of the stage as he ably emphasized the mood of every song. Just as easily, he enjoined his audience to dance, jump and raise their mobile phones whenever he asked them to.

As such, the charismatic musician impressively shifted audience’s mood from lively to melancholic like he did with “Everglow” [their tribute to Muhammad Ali who also passed away in 2016, and to a huge fan of Coldplay whom they call Ely] and “Fix You” [said to have been written for Martin’s ex-wife Gwyneth Paltrow when she lost his father in 2012].

The tributes did not end there as Martin shared with the audience how he met with Filipino fan Kenneth that Tuesday morning before the show. Kenneth is a huge Coldplay fan who was barred from watching the show because of his ongoing battle with Stage 4 cancer. He dedicated “Ink” to his new friend.

Coldplay’s was also a visual feast with pyrotechnics, bursts of confetti, lasers, stadium canons, and flame on stage.

The antics, including Martin’s impromptu song for the Philippines, made the audience feel special.

“I love Coldplay! It’s definitely worth the 17-year wait,” one fan exclaimed at the tailend of the concert.

In ending, an overwhelmed Martin, speaking on behalf of his bandmates promised, “We’ll see you next time! Good night!”

And so another dream began for their fans in the Philippines.