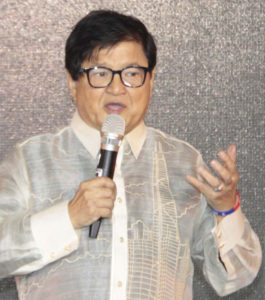 THE Philippines should be the 19th largest economy in the world and second largest in Asia, but is being held back in part by an “obsolete” approach to urban planning, noted architect Felino Palafox told attendees of The Manila Times Philippine Model Cities forum.

In Philippine urban planning, Palafox said, “We follow the example of Hollywood and Los Angeles, cities designed for the automobile. I’ve met three different mayors of Los Angeles at various events and conferences, and they’ve all said the same thing: In terms of urban planning, Los Angeles is a 60- or 70-year-old mistake.”

Palafox continued, “I learn of best practices for sustainability in other countries, but in this part of the world, they are considered revolutionary ideas. We are so obsolete.”

Palafox, who is considered an expert in high-density architecture and design – he is currently the country representative and fellow of the Chicago-based Council on Tall Buildings and Urban Habitat – stressed the importance of sustainable design in the face of accelerating urbanization, particularly in the Philippines.

“This is the century of the cities,” and Metro Manila is one of the fastest-growing cities in the world, adding about 60 people per hour, Palafox said.

He said, however, that the problem is not one of population density, but of distribution. “Even at the population density of Hong Kong (at 6,644 persons per square kilometer, the fourth-most densely populated place in the world), the entire seven billion population of Earth would fit into the state of Texas,” he explained.

Because of inefficient population distribution and profit-driven development, Palafox said “the workers in central business districts cannot afford to live where they work, and those who can afford to live there live in gated communities with low density, perhaps four houses per hectare.”

One result of this is the metropolis’s heavy traffic congestion; first because so many people must commute on roads that are not suitable for alternative forms of transportation (such as walking or bicycling), and second because isolating communities behind walls and gates results in inefficient transport corridors.

A study by the Japan International Cooperation Agency in 2013 concluded the Philippine economy loses P2.4 billion per day in lost productivity due to traffic congestion.

Palafox suggested a complete overhaul to the approach to urban planning in the Philippines, using the analogy of the human body. “Open spaces are the city’s lungs; its central business district is its heart, and its transport corridors are its arteries,” he said. “This country needs a lung transplant, a heart transplant, and new arteries.”

Solutions to making Philippine cities more sustainable, he explained, include providing more pedestrian and bicycle paths; developing mixed-use vertical developments and neighborhoods where living space, work areas, and shopping and entertainment are concentrated for the benefit of residents; and creating mixed-income urban developments to avoid concentrations of either very low-income or very wealthy populations.

Another key solution is designing roads and transport corridors according to the principle that “those who have less in wheels should have more in roads,” Palafox said.

The concept devotes one-third of roadways to pedestrians, one-third to vehicles, and one-third to landscaping to maintain some greenery in urban areas. “If we did this, there would be five million trees along Edsa,” which would result in a cleaner and more attractive urban environment, Palafox added.