TO assert the country’s independence, the Philippines will no longer accept aid from the European Union (EU), Malacañang said on Thursday. 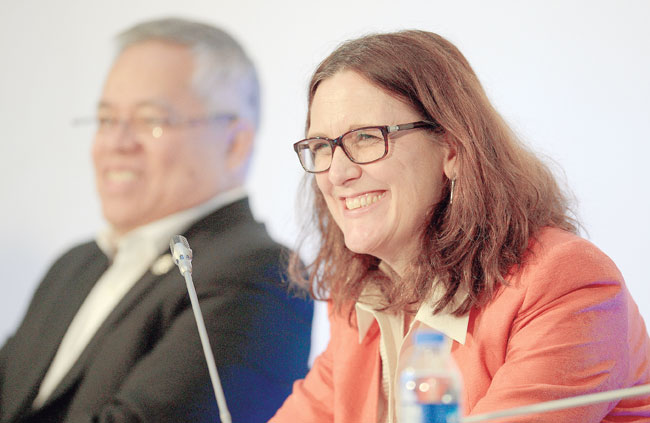 Executive Secretary Salvador Medialdea said this new policy will keep the EU out of the affairs of the Philippine government.

“We’re supposed to be an independent nation,” Medialdea said in a text message sent to reporters.

The EU delegation in Manila has been informed of the new policy that puts at stake 250 million euros ($278.7 million) in grants. A big chunk of the money was allocated to Muslim communities in Mindanao.

Presidential spokesman Ernesto Abella said President Rodrigo Duterte approved the recommendation of the Department of Finance (DoF) to reject new EU grants that “may allow it to interfere with the internal policies of the Philippines.”

“The Philippines reserves the right to accept loans and grants that help attain its objectives of promoting economic development inclusiveness and reducing poverty, attaining peace within its borders and with its neighbors, and fostering a law-abiding society,” Abella told reporters.

“It also reserves the right to respectfully decline offers that do not achieve these goals and offers that allow foreigners to interfere with the conduct of its internal affairs,” he added.

Abella said the rejection of financial assistance from EU would be done on a “case to case basis” and that each situation would be “dealt with separately.” However, humanitarian aid for victims of calamities may still be accepted as long as it is “unconditional.”

The EU will not appeal the decision or convince Duterte to change his mind, an official said.

“I don’t think EU people here in the Philippines will do that, asking the President to reconsider his decision.

What has been junked are aids but our business will continue,” the EU official who asked not to be named said.

The EU is the Philippines’ eighth biggest source of aid, with assistance last year worth $217 million, according to government data.

The EU has been critical of the Duterte administration’s brutal war on drugs and has condemned the extrajudicial killings. It also called on Duterte to release Sen. Leila de Lima, who is detained on a drug-related complaint.

The bloc had warned that it may remove the Generalized System of Preferences (GSP+) or the full removal of tariffs on two-thirds of all product categories if it sees no “substantive improvement in the next few months” in the Philippines.

Trade Secretary Ramon Lopez said the country does not want to lose the GSP+ trade agreement with EU, stressing that it is mutually beneficial.

“GSP+ provides better market access to our exporters but it allows cheaper products for EU consumers or cheap inputs for their manufacturers. EU investors in the country exports back to EU also benefit from the GSP+. It’s a mutually beneficial arrangement,” he added.

Socioeconomic Planning secretary Ernesto Pernia however said the government may retract the decision.

“I will not take that as a policy. It is more of a reaction to criticisms. To me, on face value, it appears kind of unwelcome or not a good move but perhaps, I don’t think it’s going to remain as such,” Pernia told reporters.

Some senators and economists believe that the Philippines can make do without EU grants, although it will affect trade and beneficiaries.

Sen. Sherwin Gatchalian said the Philippines can afford to lose P13 billion worth of grants.

“It is my opinion that the loss of P13 billion in foreign aid from the EU is a price the Philippines can afford to pay in pursuit of truly independent foreign and economic policies,” said Gatchalian, chairman of the Senate committee on economic affairs.

The senator however expressed belief that the decision does not mean that the Philippines will abandon the economic ties it has built with EU over the years.

“The Philippines will always be willing to build meaningful trade relations with any State or regional organization that is willing to deal with us in good faith, as peers and equals,” he added.

Sen. Francis Pangilinan stressed the need for government to ensure that all existing EU programs beneficial to the Filipino people do not suffer with the decision to reject aid.

Meanwhile, Bank of the Philippine Islands Vice President and lead economist Emilio Neri Jr. said it is hard to measure the effects of the President’s decision, which may include possible trade sanctions.

Metrobank research head Marc Bautista does not see any negative impact to the overall economy.

“The grants involved are said to be in the range of only roughly $0.280 billion, which means these are less than 1/10th of 1 percent of the overall economy,” he said.

Bautista said the absence of such grants will hardly be felt and “can easily be dwarfed by inflows coming from overseas Filipino workers remittances and business process outsourcing revenues, which at roughly $50 billion per annum.”

“Foreign direct investments and other assistance coming from other countries will more than compensate for the discontinuance of EU grants so we don’t see any adverse impact to the economy coming from it,” he added.

“Viewed in this manner, the amount seems relatively minimal, although it masks the fact that some poor Muslim communities will be negatively affected the most,” he said.

In April, the EU reaffirmed its commitment to peace and development in Mindanao during the closing ceremony of the Mindanao Trust Fund Reconstruction and Development Program held in Davao City.

The Mindanao Trust Fund is a facility where various donors contribute to the socio-economic recovery of conflict-affected communities of Mindanao. The EU is the main contributor to the multi-donor trust fund, providing around 80 percent of the total amount.

Rep. Teddy Baguilat of Ifugao warned that the administration’s decision of rejecting aid just because of the EU criticism is as good as inviting a full-blown war against one of the largest trade, investment and development partners of the Philippines.

“Such an unprecedented move is short-sighted and obviously not well thought out considering that some of the administration’s own key economic managers have said they were not consulted before the decision was made. It is a haphazard move that the government cannot afford to make,” Baguilat said in a statement.

“Criticism or observation should not be mistaken for interference. The EU has demonstrated through the years that it is a partner we can rely on. To just unilaterally reject aid based on, so far, unsubstantiated claims of interference is ill advised. At the very least, the government must be transparent enough to disclose the specifics of this rejection of assistance so that we can all be ready for any possible fallout,” Baguilat

“If they were going to reject such aid because of EU interference in domestic affairs, then that would be well. But it if it will be because of EU’s concerns on human rights violations… EU’s call to end the extrajudicial killings is not a violation of our sovereignty,” Elago said.