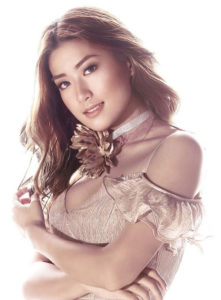 It was in 2013 when I first came across the energetic Janeena Chan. It was a given that she was beautiful but what surprised me was her genuinely happy personality.

You see in the world of social media stars, it is so easy to be pretty for Instagram and so on, but to be actually engaging in person is not too very common. Clearly, this is what caught the attention of advertisers, her followers, and the modeling and television industries.

Unknown to many, the host of “Upfront” during UAAP season on the ABS-CBN Sports and Action channel got her first taste of celebrity way before the social media age. She won a singing competition.

“I joined one out of fun and curiosity,” she recalled. “Then it had a domino effect as one thing led to another and opportunities just opened up. I was in pre-school when I joined ‘The Search for the Next Disney Singing Princess,’ and fortunately won. Soon after, someone from the modeling industry approached my mom, which led me to my first modeling stint for Barbie.” 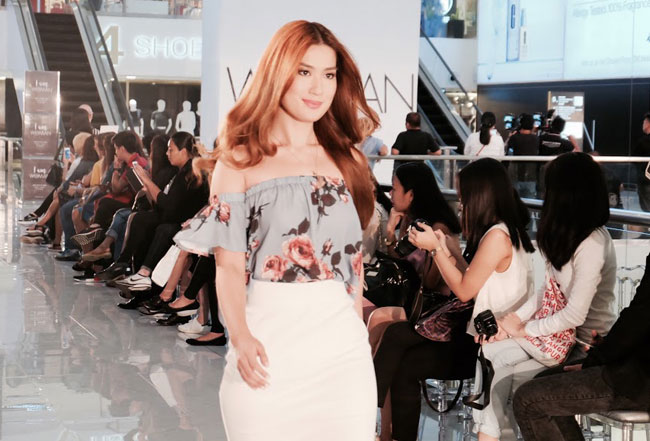 Chan eventually became a host for children’s telemagazine “Kid’s TV,” which honed her skills for the job at the tender age of 11. She then assumed the role of junior journalist for RPN 9’s “Newswatch Junior Edition,” and was trained to research, write, produce, and even edit her own weekly segments.

“It was such a great training ground for me and it convinced the CEO of the station to give me my own segment on the main news program, Newswatch, which I did for five years up until I was 19. I also became a junior jock for [FM station] Magic 89.9.”

Never resting on her laurels, Chan was highly active in school and extra-curricular activities during this time and participated in the drama and music clubs, and continued to compete in gymnastics.

While completing her Communications degree from Ateneo De Manila University, she took up the chance to be a courtside reporter for the Asean Basketball League, which aired live on Fox Sports Asia. It was also during this time that Chan started blogging and producing professional multimedia work, which led her to become one of the country’s most influential online personalities.

Without a doubt, Chan was living the charmed life until she revealed in a very personal blog how she suddenly had to battle Bell’s Pals­­—a nerve disease which paralyzes one side of the face. 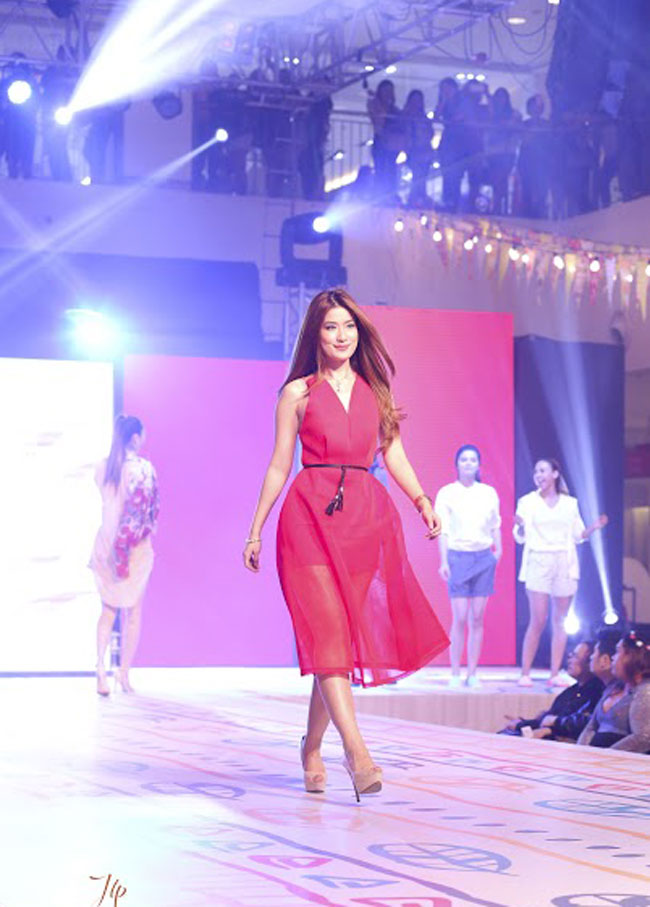 With genuine happy personality and sincerity in real life, social media star Chan hascaptured the hearts of her followers, of advertisers and of modeling and television bossesto become the celebrity that she is today.[/caption] 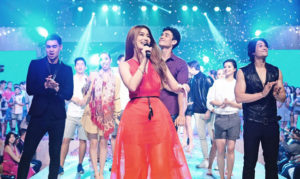 “It happened in July 2016. I was on my way to a hosting gig when I asked my mom take me to the ENT [Ear Nose and Throat doctor] because there was a buzzing and deafening sensation in my ears. I was also feeling particularly weak and had been meaning to see a doctor but unfortunately my doctor was not available so I went ahead to [my next appointment],” she recounted.

Before she got out of her car, Chan needed to retouch her lipstick only to be frightened at what she saw in the mirror.

“I noticed that I couldn’t do a full smile and only the right side of my mouth would curve to form a smile—the other half was frozen.”

She called her mom who told her to drop everything and go to the nearest hospital. And for someone who worked in an industry that places such a high value on beauty, the emerging diagnosis came as a shock.

“I was definitely alarmed, but being an idealist I didn’t give into the worry and fear because I knew we caught it in its early stage. All I had to do was go through extensive medical care and build back my immune system.”

Chan was determined to get well as soon as possible because she had work to do and she always kept her commitments. She also had dreams to fulfill.

During this time, the more difficult battle according to Chan was how her inner strength deteriorated.

“I am generally a happy person, determined and full of energy. I felt the opposite during the ordeal, and on top of that, half of my face was paralyzed! Some nights, the jolly me could still laugh about how hilarious and distorted my face looked especially when speaking, but other nights I’d feel so down and empty inside. I missed going out, being with friends, doing the work I love, and just craved for normalcy to return to my life.”

Despite her ordeal, Chan decided to turn to her faith.

“I knew this was a test. And I know God wouldn’t give me anything I can’t handle. Prior to being diagnosed, I was experiencing a high in my career—there were so many new opportunities and career milestones and my plan was to just keep going. The diagnosis made me pause for a while and ask myself, ‘What am I hustling for?’”

In the midst of her emotional struggle, Chan turned her energies into trust God.

“It pained me to reject work proposals, even one abroad, but I knew I needed to take care of myself and lift spirits. It was the only way to recover faster,” she related. 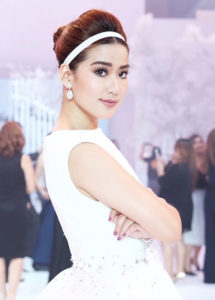 “One day, I was reading ‘Purpose Driven Life’ by Rick Warren and serendipitously found myself in the chapter about pain. It said, when God allows pain to enter your life, it’s His way of calling you back to him with a megaphone. It was just what I needed to read. God simply wants us to be closer. He wants me to experience this particular challenge, in this particular time of my life so I can share my story to those who need to hear it the most. God said not to be afraid so why should I be terrified?”

As she continued to battle her disease, Chan all the more held on to her relationship with God.

“Pain, challenges, obstacles are all there so we can strengthen our relationship with our Creator. It’s His way of pulling us closer to him in our truest, most vulnerable naked souls.

“Maybe I was merely hustling blindly before, maybe I was moving too quickly, failing to listen and respond to His deeper calling. But now, having experienced the pain and the pressure, and being saved by His Grace has made me more resilient, humble, sensitive, faithful and grateful.

“Simply put, it added more meaning and purpose in my life. They say adversities are tests of character, and I’m just so happy to have discovered more of myself and my loving God in my lowest of lows. (James 1:1-13). God won’t give us anything we can’t handle. And that is precisely why we have our angels on earth.”

Chan also realized the importance of gratitude through her ordeal.

“I was always a grateful person to begin with, but now Iím even more grateful for every full smile I get to beam, every time I get to go out and accomplish my work and the things I love doing with full energy. And I could say my spirit and faith has become stronger too.”

Now that she is healed and healthy, Chan has decided to make Bell’s Palsy awareness her personal mission. 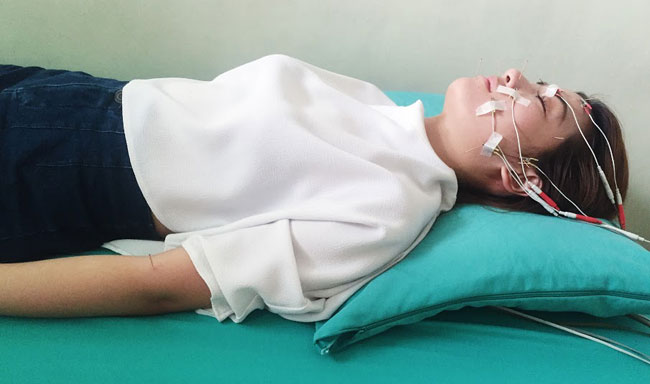 In July 2016, the young multi-hyphenate suddenly had to battle Bell’s Palsy—a nerve diseasse which paralyzes oneside of the face. After receiving treatment, changing her lifestyle and, most significantly, turning to her faith, Chanis now ready to inspire others with her story of survival[/caption]

“I was first hesitant and even embarrassed to share this story at first but I owe it all to Him. We all have our own tough battles; some are just better at hiding them. But it’s so important to speak up and share how these trying times ultimately put things into perspective in the daily blur of our lives.” 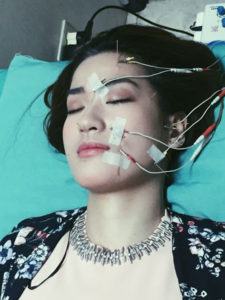 She went on to say, “I hope this reminds everyone to never take for granted how much God blesses us abundantly in more ways than our minds can comprehend—even in the littlest details that may seem so ‘normal’ or mundane. I know it’s so easy to get distracted, being caught up in our activities, to-do lists, IG stories, and millennial matters. But never be too busy to live your own versions of what it means to have a truly ‘unparalyzed life.’ Whether it’s finally being unafraid to share your talents even if you think it’s too late, being more patient and understanding with everyone you meet, or just living a healthier lifestyle altogether. Do it for yourself, do it for the people who love you, and most importantly do it for His Greater Glory.”

To know more about Janeena Chan visit her website at www.janeenachan.com.