THE blogger behind the anonymous “Pinoy Ako Blog” or PAB was forced to reveal herself on Friday days after being outed by a pro-Duterte rival. 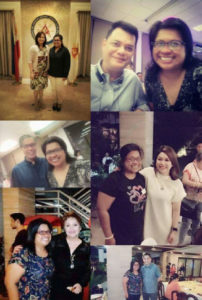 Laurio complained of being bashed on social media, but other bloggers hit back and pointed out that she had libeled many people including senators while hiding in anonymity.

“PAB is an ordinary person, but is now being bashed every day on social media by Thinking Pinoy a.k.a. RJ Nieto and his minions,” she wrote. “This week was the hardest for me and my family. I filed a leave of absence from work because of the threats and hate messages I have been receiving [on] my personal ]accounts] both from Twitter and Facebook. I have filed a leave of absence from school, too.”

“These people are trying to destroy my life by exposing my picture, my real name and my school. Everyday the attacks are escalating,” she said.

“Yes, Maria Josephina Vergina Laurio is Pinoy Ako Blog and I will see you all in court.”

De La Salle professor Antonio Contreras lashed out at Laurio on Facebook, saying: “This woman slandered and maligned me just because she disagreed with my political views. I have done nothing to her, and yet she unleashed her verbal assault towards my persona.”

“She is not a victim. She is the personification of libel. And the last time I checked, libel has not been decriminalized yet,” he added.

Florin Hilbay, former solicitor general, expressed support for Laurio, whom he described as an articulate critic.

“We benefit a lot from a speaker like PAB, who communicates our outrage in ways that make us laugh. Instead of us seething with anger, PAB provides the facility to dissent powerfully through magical instruments that meld logic and emotion—humor and sarcasm,” said Hilbay on Facebook, with the hashtag #TayoSiPAB.

Writer Miguel Syjuco said Laurio was only presenting her critical views on the government.

“Attacked as a dissenter, accused of tactics by those whose tactics are worse, and pilloried for her political perspective and dedication to her ideals – she is filing cases, dropping her anonymity, and taking a stand. Many of us know well how she feels. And on principle, for free speech, public discourse, and our right to express ourselves without our safety threatened, I stand with her,” said Syjuco.

The Senate investigation on fake news on October 4 was triggered by Laurio’s blog entry titled the “Seven Deadly Sens,” which took seven senators to task for not signing a resolution condemning extrajudicial killings.