The United States will consider a possible free trade agreement (FTA) with the Philippines following a bilateral meeting during the ongoing Association of Southeast Asian Nations Summit, a Cabinet official said.

“[W]e were able to raise to President (Donald) Trump and US delegation the growing trade between the two countries,” Trade Secretary Ramon Lopez told reporters. 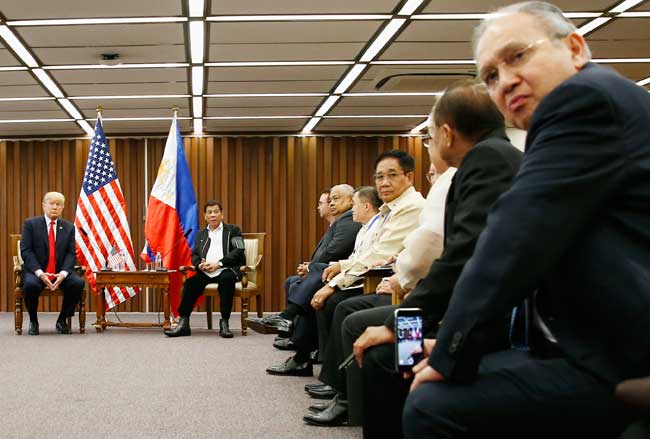 Philippine President Rodrigo duterte (2-L) and US President donald Trump (L) hold a bilateral meeting on the sidelines of the 31st association of Southeast asian Nations (aSEaN) Summit and Related Meetings at the Philippine International Convention Center in Manila on November 13, 2017. POOL PHOTO

With the Philippines already enjoying a “little” trade surplus and incentives under the Generalized System of Preferences (GSP) program, he said that they forwarded a “wish to elevate the trade arrangements to start exploring the FTA with the US.”

Trade Undersecretary Ceferino Rodolfo earlier this year noted that with the US having dropped out of the proposed Trans-Pacific Partnership, the Philippines’ options with regard to increased access to American consumers were limited to GSP enhancements or an FTA.

Following a bilateral meeting in July, the Office of the US Trade Representative (USTR) said officials had agreed to “foster free, fair and balanced trade” under an existing Trade and Investment Framework Agreement (TIFA).

Lopez in June announced that the USTR had expanded the Philippines GSP privileges to include travel goods such as bags, wallets and backpacks, which would now enjoy zero duty after previously being charged tariffs starting at 6 percent.

Based on latest official data, the US was the country’s top export market in September, accounting for 14.3 percent or $802.6 million of total outbound shipments.