DUTERTE IS OBJECTIVELY AND IRREFUTABLY THE FILIPINO OF THE YEAR

THE Philippine Daily Inquirer chose blogger Jover Laurio as its Filipino of the Year, and placed the soldiers and policemen who fought against the IS-linked terrorists in Marawi only in the second rung. This not only is an indication of the very sorry state of journalism in the country.

The Inquirer has spat on the graves of our uniformed men who were killed by terrorists in Marawi. Because of its Yellow partisanship, one of the country’s biggest newspapers in the country has insulted the nation.

As this newspaper’s investigative series on the Battle of Marawi has revealed, the Moro jihadists linked with the Middle-East based Islamic State of Iraq and Syria meticulously planned their invasion for months, and were heavily financed by the IS. It was planned to be a breakthrough victory for the IS, its major push outside the Middle East.

If Marawi had not been retaken, the IS would have established a foothold in our country and in Southeast Asia, to which thousands of jihadists all over the radical Muslim world would have rushed, as they did in Afghanistan thirty years ago, and more recently in Iraq and Syria. The IS with its billions of dollars, partly raised from the numerous oil fields it captured, would have thrown hundreds of millions of dollars to finance the Moro jihadists.

Do I really need to explain more that the Republic’s victory over the IS-linked terrorists in Marawi has far-reaching consequences not only for the future of the Philippines but for that of Southeast Asia, where the biggest religion is Islam? That we owe our future as a nation to those who threw out the terrorists that had taken over Marawi?

Do I really need to explain that the Filipino of 2017 should be those who gave their lives in the fight against the terrorists in Marawi, all 157 soldiers and seven policemen, most of whom were in their 20s and early 30s, with several just fresh out of our Philippine Military Academy who left behind young widows and babies?

C’mon, if we just drop for a moment our partisanship, shouldn’t the man who ultimately led the troops in Marawi, who raised their morale – in one instance, crying with the widows of the those killed – get some credit, and be honored as 2017’s man of the year – President Duterte?

Not only for that, again if we just strain to drop our partisanship, but for his achievements this year – winning the war against illegal drugs, fighting corruption, setting an independent foreign policy, cracking down on oligarchs’ unpaid debts to government, ordering free college tuition in all state universities, and free hospitalization for the poor – shouldn’t Duterte be hands down, and indisputably, the Filipino of the Year? 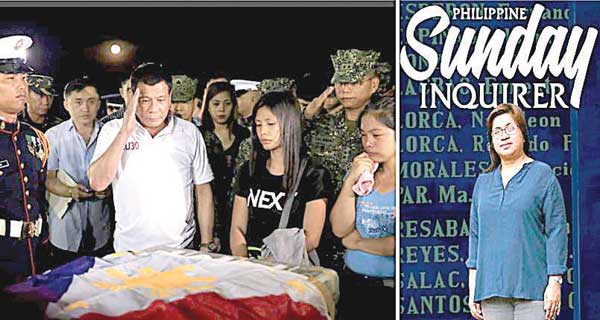 Who should we honor? Duterte and his fallen troops, or Inquirer’s noisy netizen?

Hate him or love him, it’s a no-brainer that Duterte has affected the lives of Filipinos in 2017 so much he is irrefutably the Filipino of the Year. He may falter in 2018 and succeeding years, but there is no doubt that he has done his job remarkably well in 2017.

Duterte’s achievements aren’t my illusions: a high 69 percent of Filipinos are cheering this president, and an all-time record-high of 96 percent of them think this year will be better, a proxy indicator for confidence over his rule.

Are the PDI editors so deeply Yellow that they refuse to give credit to Duterte because the allegations of extra-judicial killings in his war against illegal drugs and his allowing Marcos’ corpse to be buried at the Libingan have disqualified him from being recognized as the Filipino of the Year?

Was there an instruction to PDI editors not to put Duterte in their nomination forms, coming from its Rufino-Prieto owners? Unsurprisingly, since Duterte kicked them out of the Mile Long property they have held illegally for 30 years and whose Dunkin’ Donuts he claims owe government P1.5 billion in unpaid taxes. Indeed, as the PDI itself revealed, the nominees for Filipinos of the Year, excluding Supreme Court Justice Antonio Carpio, were all Yellows and anti-Duterte personalities.

It is astonishing that not a single one of the PDI’s 49 editors polled nominated Duterte. Are they so afraid of the newspaper’s owners, or so brainwashed by the Yellow Cult?

That PDI is so much a Yellow newspaper, and detests Duterte at very unprofessional levels, has become irrefutable with their choice of Filipino of the Year. All past presidents since the feature was started in 1991, were chosen as Filipino of the Year, with many designated as such on the year or year after they assumed power – Joseph Estrada in 1998, Gloria Macapagal-Arroyo in 2002, and President Aquino in 2010. (Cory Aquino was named twice, in 1997 and 1999; Fidel Ramos in 1996).

The PDI’s insult to Duterte and the military who fought off the IS-linked jihadists is exacerbated by the choice of a Yellow blogger Laurio.

Mention Duterte and our soldiers who fought in Marawi anywhere, and there is no Filipino who wouldn’t recognize them. Laurio, PinoyAko blog? Only those who spend so much time in the internet would recognize her, and only editors whose world has been only in media would think she has contributed anything to the nation.

I am aghast that veteran print journalists would pay tribute to a blogger whom they would never recruit as a reporter or even a newsroom clerk, who has never written more than three paragraphs arguing a particular point, who has not contributed an iota to the national discourse, nor to journalism. Her expertise – and appeal as a blogger -- is limited to bad-mouthing supporters of Duterte with street-lingo like “balahura” and “inggitera”.

I am angry that PDI even used as site for its photo-shoot for its article on Laurio the Bantayog ng mga Bayani, a monument for those who fought for their beliefs in the martial-law era, where the names of many of my dear militant comrade-friends, and even of my late wife Raquel, are engraved in the marble walls. That is so foul. Is the PDI elevating Laurio as a heroine at par with those whose names are there such as Jovito Salonga and Lorenzo Tanada?

Did this blogger in the thousand posts she claims she has made ever pay tribute to them, or to their ideals?

I am sad that a once prestigious newspaper which, despite its decline in power, still has a big role in national discourse, couldn’t be professional, and nonpartisan enough to look for and honor Filipinos who would inspire us as a nation and are models for the Filipino youth.

The PDI editors have elevated a petty blogger, whose sole achievement has been to make daily hateful, and intellectually vapid posts against Duterte and his supporters in order to while away her time in traffic, to the pantheon of our presidents, our militarymen killed fighting our enemies, and of course, of a fearless, crusading journalist, their late editor in chief Lety Magsanoc, its Filipino of the Year just two years ago.

She must be turning in her grave. 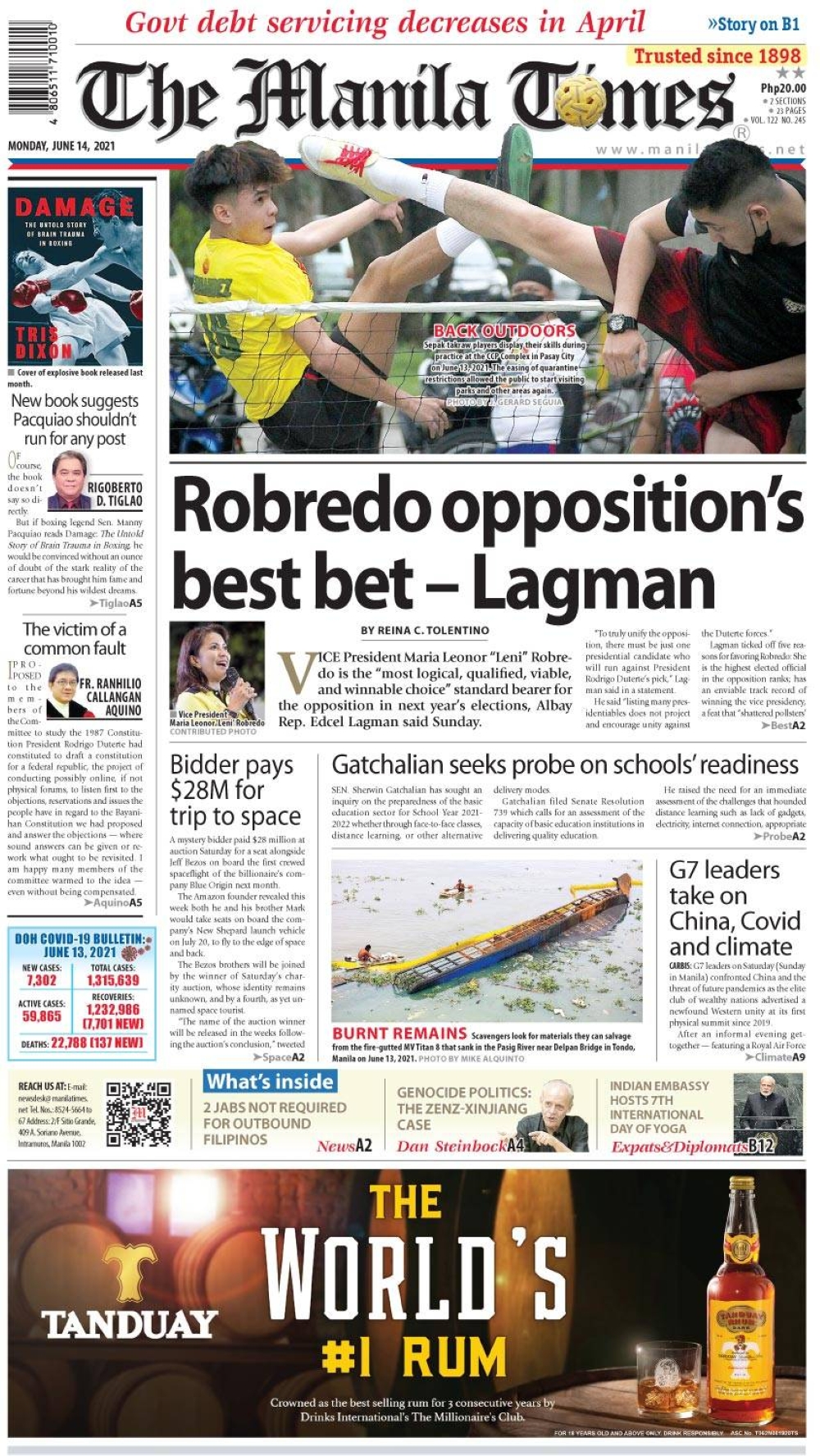