‘The telco duopoly has become the CPP-NPA’s biggest funder’ 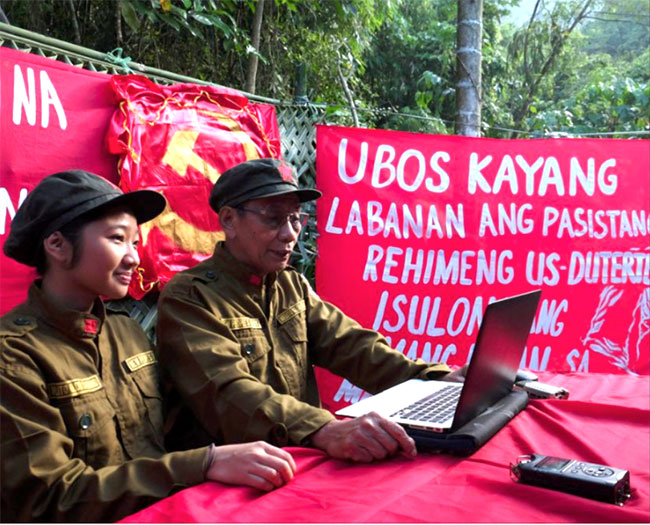 The accuracy of this estimate is bolstered by data reported in a study on the armed conflict in Bicol published way back in 2006 by the economic think-tank Philippine Institute of Development Studies. The study reported that in the Bicol provinces, the NPA had been demanding “P50,000 to P200,000 as yearly tax per site, and as much as P500,000 for a newly set up cell site.”

This rate of “revolutionary taxes” would compute—at an average of P200,000 per cell site for the telcos’ roughly 10,000 cell-sites in far-flung areas—to P2 billion per year in CPP-NPA revenues. But that was the rate reported 11 years ago.

The study noted that the telcos may have been willing to pay the “revolutionary tax,” as the “cost of damage from the bombing of the cell site ranges from P1 million to P2 million per cell site, if only the base is destroyed.“ “If the entire cell site is destroyed, the cost of rebuilding it may be anywhere between P10 and P20 million,” according to the study.

“Smart and Globe are said to be the biggest sources of revolutionary tax of the NPAs in Bicol,” the study asserted. My sources claim they have become such for the entire insurgency.

The communists and the telco foreign capitalists appear to have forged an alliance very much mutually beneficial.

“Whether they chose to put up their camps near the cellsites, or the telcos put up cellsites at their request near their camps, we can’t say, but major NPA encampments usually have strong cell signals that their commanders rely a lot on mobile phones and use the internet a lot,” a military intelligence source said.

That the CPP-NPA gets P3 billion annually from the telcos would explain why it has been totally silent in exposing and opposing not only the monopoly nature of the telcos, but the fact that these are owned by foreign monopolists.

The notion that Third World countries’ poverty is due to foreign control of its industries has been a major tenet of Marxism and “Mao Zedong Thought,” the communists’ ideology.

The CPP’s bible, Amado Guerrero’s Philippine Society and Revolution (PSR) as well as its basic document, “Program for a People’s Democratic Revolution” emphasize that the “people’s twin enemies are foreign monopolists and feudalism.” PSR, when it was published in 1970, even had an annex that listed all of the foreign-controlled firms in the country, which the book implied were legitimate targets of the revolution. Its National Democratic Front’s demands on government as contained in its draft of the “Comprehensive Agreement on Social and Economic Reforms (CASER)” includes one for the state to prohibit “foreign monopoly control of strategic industries,” of which telecommunications indisputably is one.

Yet there has not been a single sentence or statement in the CPP and the NPA’s publications, nor those of its front organizations and sympathetic research outfits—such as Ibon Databank. the UP’s Third World Studies Center, and the news website bulatlat.com—condemning the foreign control through PLDT-Smart and Globe Telecom of our telecoms industry.

The biggest owners of PLDT are the Indonesian tycoon Anthoni Salim and the mammoth Japanese firm NTT.

Globe Telecom’s biggest shareholder is the Singaporean state through SingTel. Aside from these, some 20 percent of each firm is owned by foreign passive shareholders in the stock market, or those who the communists describe as tools of financial imperialism, which they term as “the highest form of capitalism.”

That the Filipino communists are silent about the foreign-controlled duopoly in exchange for P3 billion yearly is of course another instance of their ideological bankruptcy and innate political opportunism.

This is really not a new development but has been an essential feature of the Philippines’ communist insurgency: it had been financed quite ironically by exploitative elites, rather than, as the communists’ propaganda has it, by the masses.

The CPP-NPA grew in the years before martial law because of the massive financial and logistical support by the Aquino-Cojuangco clan and other anti-Marcos tycoons. The rallies organized by the CPP in the Philippines in the 1970s before martial law was declared were bankrolled by several of such billionaires – I know as I was for a while with the financial unit that collected the money from such “sympathizers,” whom we categorized as the “enlightened national bourgeoisie.”

In the 1980s the NPA’s biggest financial supporters were loggers, which they protected and thus helped in the denudation of many of the country’s forests. In the 1990s when logging operations were limited and later banned by government, the CPP-NPA’s biggest financier were the mining firms, which were “taxed’ per hauler and bulldozer used in their operations. “It is not coincidental that the NPA’s bases have been in such areas as Samar and Surigao which have had many mining operations,” a military source said.

Since the turn of the century, with the mining industry slowing down because of government regulations, the telcos needing to keep their cell-sites intact have become the CPP-NPA’s biggest financiers.

Indeed, as in the case of Colombia where the Marxist insurgency was financed by cocaine planters and drug lords, the communist insurgency in the country grew not because of their ideology and political line that generated people’s support but because of the huge financial support by factions of the elite.

“It’s hard to be optimistic that the Duterte’ administration will crush the terrorist NPA if it continues to get such huge funds,” said an army general.