A CONSULTANT of the National Democratic Front (NDF) in the scuttled peace talks between the government and communist rebels was arrested in Quezon City.

Rafael Baylosis and companion Guillermo Guerrero were apprehended on Wednesday in a joint operation by members of the Intelligence Service of the Armed Forces of the Philippines and the Philippine National Police (PNP). 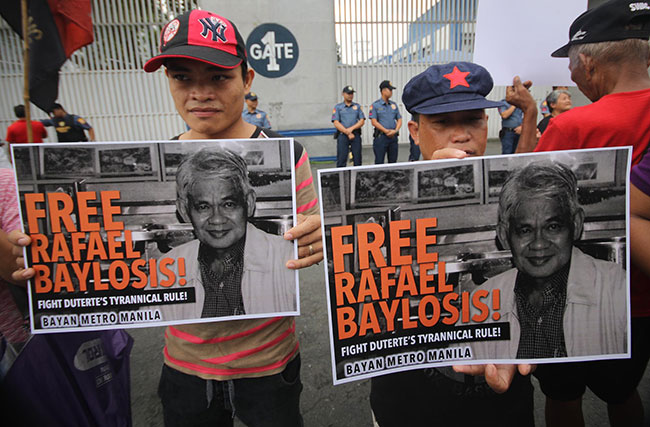 A police report said that Baylosis and Roque were arrested along Aurora Boulevard corner Katipunan Ave. at  3:45 p.m.

The report said the CIDG received intelligence information on January 30 that two suspicious-looking armed individuals were seen on the boundary of Manila and Quezon City, prompting the unit to conduct casing and surveillance in the area.

Seized from Baylosis and his companion following the arrest were two caliber .45 pistols, 14 ammunitions, two pieces of magazines, cellphones, and assorted documents.

Baylosis and Guerrero were placed under the custody of the PNP Criminal Investigation and Detection Group at its headquarters in Camp Crame.

Baylosis is facing murder charges in Inopacan, Leyte and was allowed to participate in peace talks in 2016 by the Duterte administration as a gesture of goodwill.

However, Duterte scrapped the negotiations on November 2017 after Sison called on the NPA to intensify its attacks on government troops despite a ceasefire.

Duterte responded by tagging the NDF, the Communist Party of the Philippines (CPP) and armed wing the New People’s Army (NPA) as terrorist groups.

The arrests of Baylosis and Guerrero angered the NDF and its sympathizers.

Through its leaders, the NDF branded the arrests of Baylosis and Guerrero “illegal” and a “flagrant violation” of the Joint Agreement on Safety and Immunity Guarantees (Jasig) between the government and the rebels and demanded their “immediate and unconditional release.”

Jasig is an agreement between the Philippine government and the NDF signed by their respective negotiating panels on February 24, 1995 to facilitate peaceful negotiations and to form a favorable atmosphere conducive to free discussion among consultants, staffers, and other members of the parties.

“He is a member of the NDFP Reciprocal Working Group on Political and Constitutional Reforms. He and his companion, Jun, are now illegally detained at Camp Crame in Quezon City,” NDF consultant Luis Jalandoni said in a statement.

Jalandoni said the President should be blamed for “trampling” on the peace agreement.

He also called on all “peace-loving” people and organizations to stage strong campaigns for the release of the two and at the same time, ask Duterte to respect and implement all binding peace agreements such as the Jasig and the Comprehensive Agreement on Respect for Human Rights and International Humanitarian Law.

“President Duterte must not be allowed to kill and destroy the peace negotiations,” Jalandoni said.

“Every arrest of an [NDF] peace negotiator or a consultant makes the resumption of peace negotiations more difficult and serves to further incite the armed revolution of the people,” Sison said.

Several lawmakers from the Makabayan bloc at the House of Representatives condemned the arrest.

“Rafael Baylosis was arrested on the basis of a warrant that stemmed from false or trumped-up charges, and after the peace talks were terminated by Duterte,” ACT Teachers Party-list Rep. France Castro said in a statement.

“This is a clear violation of the Joint Agreement on Safety and Immunity Guarantees and the Comprehensive Agreement on Respect for Human Rights and International Humanitarian Law,” he said.

In a separate statement, Bayan Muna Rep. Carlos Isagani Zarate labeled the arrest of Baylosis “as ill-advised and a “blatant violation” of Jasig.

Zarate said that “up till now, the GRP peace panel did not send yet any written and official termination of the peace negotiations to the [NDF] panel as provided under Jasig.”

Malacanan Palace reiterated, however, that the arrests of Baylosis and Guerrero were legal.

In a news briefing in Baguio City, Palace spokesman Harry Roque Jr. said the communists should not use Jasig as an excuse to declare the arrests illegal because the peace talks between the two sides had been terminated.

Roque said that it would be a “dereliction of duty” if forces of the government did not arrest a person who has a pending case or a warrant arrest, or if there was basis for a warrant-less arrest.

“If they think that the arrest is illegal based on the Jasig, then they should file a habeas corpus. There is no martial law in Luzon,” Roque said.

The arrests of Baylosis and Guerrero came about two months after Duterte ended talks with the communist rebels.

Other high-profile NDF consultants who were released from detention by the government to participate in the talks were Benito and Wilma Tiamzon. Both remain at large.