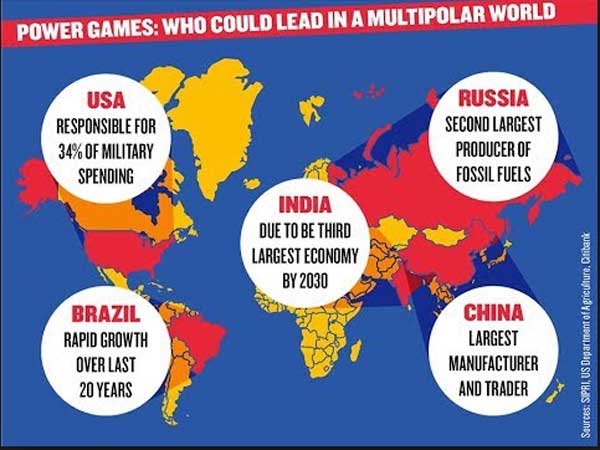 Multipolarity for dummies: What it basically means in the 21st century, in which the US and Europe are no longer the military, economic, and cultural hegemon.

It is clear enough why countries like the US and its Western allies are feeling upset at losing their once unstoppable economic and political monopoly over the Philippines. As such, they are using their mainstream media outlets and international political associations to slander Duterte as much as possible.

But why is it that some independent commentators or self-described activists who don’t normally take mainstream media stories as gospel, also see fit to slander Duterte?

The key to understanding why Duterte is misunderstood even among political sceptics in the wider Western world, requires understanding the fact that concepts like 21st century non-alignment, multipolarity and political values which transcend traditional definitions of right and left, are still grossly misrepresented, in both mainstream and so-called ‘alt-media’.

Neither right nor left

Duterte, like most of the respected leaders in modern Asia, cannot be defined as right- or left-wing — he is both and he is neither. In one sense, his policies which use state power to enhance the living standards, safety and economic condition of ordinary people might be thought of as traditionally socialist.

However, his embrace of international commerce, tax relief for ordinary people, an attitude that embraces entrepreneurship and big infrastructure projects, could be thought of as center-right. In reality, neither of these labels apply, just as they don’t readily apply to Vladimir Putin, former Singaporean Prime Minister Lee Kuan Yew or Chinese reformer Deng Xiaoping who famously rejected dogmatic politics when he said,

“It doesn’t matter whether a cat is black or white, as long as it catches mice.”

While all of the aforementioned men who have transcended traditional political stereotypes are very different individuals, they all have one thing in common: the fact that they place political problem-solving over and above ideological or dogmatic considerations.

Just as many adherents of international liberalism hide behind bogus claims of human rights violations in the Philippines to justify their neo-liberal economic agenda, so too are others missing the essence of Duterte. Some of the far-left criticize Duterte for his tough stance against the terrorist group New People’s Army(NPA). The idea that the NPA could bring any benefit to the country when it has taken up arms in a multi-party democracy in the 21st century and done so at a time when a country like China (which hasn’t supported such a group for decades) deals with right-wing governments, centrist governments, theocracies and moderate secular governments throughout the world, is patently absurd.

For Duterte, it is not a matter of ideology when opposing leftist NPA or the Takfiri jihadist Maute Group or Bangsamoro Islamic Freedom Fighters (BIFF); it is a matter of opposing armed terrorist groups which threaten national stability and security.

The idea that the Philippines could benefit from a Maoist system in the 21st century, is simply absurd at every level. The 21st century is the age of mixed systems and multipolarity. The 20th century by contrast, was an age of failed dogmas whose only value was to serve as a building block of future national stability.

Every major nation in the world realizes this and those who criticize Duterte for attacking communist terrorists are living in a fantasy that is totally detached from the reality of 2018. Both ultra-capitalism and ultra-communism in its most puritanical form have shown that at best they are incomplete systems and are otherwise, total failures. Duterte is wise in rejecting the extremes of both.

Likewise, those who criticize Duterte for not being tough enough on the United States, fail to realize that even China and Russia conduct business with the West, in spite of being at odds on a geostrategic and geopolitical level. International relations, especially where commerce is concerned, are not a zero-sum game.

The fact that this means decreasing ties with the US, Canada and EU, has everything to do with their attitude and nothing to do with a zero-sum ideology on the part of Duterte. Duterte is looking for win-win situations throughout the world and thus far, he has found many in both expected and unexpected places.

While the leftist critics of Duterte live in a kind of strange fantasy land, his Western right-wing critics are no better. For them, unless Duterte were to model his system on pro-Western ultra-capitalist regimes like Pinochet’s Chile, they will continue to rehash racist stereotypes about the Philippines being somehow perpetually economically and socially backward.

Publications that base their considerations on economic and political realities rather than on political dogmas and racism understand things differently, which is why investment from many different countries is flowing into the Philippines due to Duterte’s reforms.

While some secretly wish the Philippines to fail out of traditional hatreds, those with an objective point of view, realize that Duterte has already brought a great deal of success to his nation.

Ultimately, Duterte and the Philippines do not need to answer any of its foreign critics. Duterte’s job is to serve his people, not the wishes of foreigners. However, it is important in an age of soft-power projection, to have the necessary tools to explain why Duterte is so misrepresented in certain countries.

The far right and far left are there to serve themselves, while Duterte is there to serve his people based on an understanding of reality, complete with the straight-talking personality that helps make this clear to all but those who refuse to listen.

*My note: “Multipolarity” is distribution of power in which more than two nation-states have nearly equal amounts of military, cultural and economic influence. The 21st century world is evolving towards a multipolar one, where the powerful nations are not solely the US with its Western allies, but includes China and Russia and, according to some analysts, Brazil and India with their huge economies.