Continuing to fulfill its mission of generating support for Filipino visual artists, Art Fair Philippines recently staged its biggest edition showcasing exhibitions from 36 local and 15 foreign galleries in all the available floors of The Link Carpark in Makati City.

For its sixth edition, the fair put the focus on photography, with the introduction of a new section ArtFairPH/Photos, presented by the Swiss private bank, Julius Baer.

Veteran photographer Neal Oshima featured his own work for Kin, an exhibit conceptualized for the fair, and also co-curated “Provocations: Philippine Documentary Photography” with Angel Velasco Shaw. Also showcased were photos by Eduardo Masferre, work by Jake Verzosa, a selection from Silverlens, and pieces from the Julius Baer Art Collection. 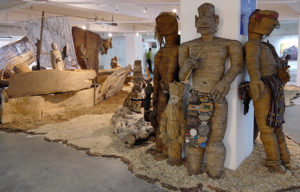 As Art Fair Philippines grows bigger in size and number of galleries, its audience has also multiplied exponentially. In its sixth edition, which attracted six times more visitors than its inaugural year in 2013, the organizers introduced timed entries, online ticketing, and new ways to enter the fair.

“We are aware that our audience has gotten bigger, and we would like to cultivate this by offering them several opportunities to learn while they are at the fair,” fair co-founder DindinAraneta said.

This year, the organizers launched a digital campaign called Art Fair Etiquette, which outlined the do’s and don’t’s in art fairs.

ICP collections manager James Kopp also delivered a talk on photojournalists’ attempts to present the hard truths of society through their images. He also showed the stark parallelism of Weegee’s standard-setting coverage of street crime and the works of Philippine photojournalists covering the police beat.

Filipino photojournalists Ezra Acayan and Raffy Lerma joined him for a riveting panel discussion that delved into the critical importance of the camera in bearing witness and of the photograph as a visual record of events.

Films by Kidlat Tahimik, the grandfather of the Philippine New Wave, were also shown at the fair which included “Mababangong Bangungot,” “Bahag Ko,” “Mahal Ko” and “Balikbayan #1: Memories of Overdevelopment Redux III.”

“Among our main considerations in developing the fair is for our visitors to feel engaged with the art scene. We want to help in connecting them with more local artists and galleries, and to offer them knowledge and experience that they can keep with them long after the fair is over,” co-founder Lisa Periquet commented.