Filipino-American Miss Teen International 2017 Carly Peeters has been an advocate of literacy among youth ever since. A dedicated volunteer of Jumpstart Children First—which is an early education organization that provides programming for preschool children in America from under resourced communities—and Build On, an international organization that builds schools in developing countries, Peeters’ lifelong dream is for children to have access to quality education.

The 16-year-old beauty queen was in the country recently as an ambassador of Yellow Boat of Hope Foundation-Philippines, a group that primarily provides boats in hard-to-reach coastal communities so learners would not have to swim to school.

As an ambassador, she had the privilege to visit some of the remote communities in Caramoan, Camarines Sur to connect with the children in the underserved areas which she took as a very humbling experience. She brought with her Smart School-in-a-Bag containing a laptop, five tablets, TV, a solar panel with batteries, and educational content. 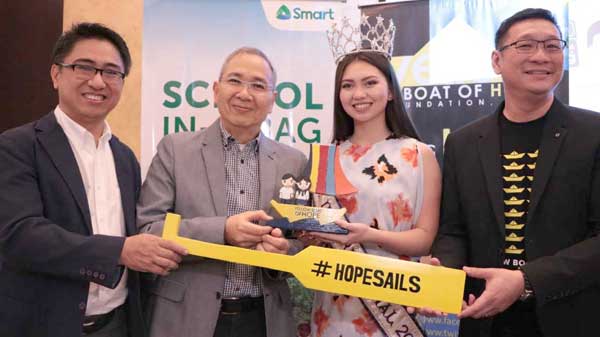 As an ambassador of Yellow Boat of Hope Foundation, the 16-yearold beauty queen goes to underserved areas and promote the importance of education

“My mom is from Manila and she’s from a lower-middle class family. She told us that education is the only reason she was able to migrate from the Philippines and make a better life for herself and then later on for us. She told me that education is the key to everything. If you’re educated you can do whatever you want in life and you can be who you want to be,” she said.

“In the US, we take education for granted because it’s accessible to all of us but when I found out that there are adults who never had even a kindergarten education and don’t know how to spell their own name, it really hit me how important it is because these people were stuck in poverty and absolutely no way out,” Peeters continued.

Prior to joining pageants, she already had a platform called “Literally Literacy” for which she started a blog series with the same name. And now that she is Miss Teen International, she has been pushing to reach more places to widen her voice in giving importance to education.

“As Miss Teen International, I have to advocate for my platform which is literacy and education, especially to focus on the youth because I think the youth is the hope of the future and if we educate them today, we will create a better future for tomorrow. Aside from visiting and helping out here in the Philippines, I am actually going to build a school in Nicaragua in June,” she noted.

It was not new to Peeters to encourage individuals and organizations to support her advocacy in improving learning among the youth but it is a different story when she entered beauty pageants. Prior to entering Miss Teen California, she tried her luck to join Binibini Teen in 2016.

“Actually I did not dream of becoming a beauty queen. I only started competing in pageants two years ago and it was just something fun that I tried because my friend had won Miss Teen California and she was like, ‘You should try it I think you’ll be good at it and you love community service so it’s a good way to kind of blend the two.’ So I eventually just fell in love with it because being on stage for like 30 seconds and have something to work toward was really enjoyable to me and on top of that, getting to advocate for a cause was just absolutely amazing,” Peeters said.

It is surprising that not many people are aware that she is also active in acting. A rising senior at Granada Hills Charter High School in Los Angeles, she has appeared in movies and shows such as “Grey’s Anatomy” (2017) as Jamie, “Little Loopers” (2015) as Tiarre and “A Cowgirl’s Story” (2017) as Cinda, which is a show that is available on Netflix.

“Being a beauty queen, an actress and a student is definitely not easy. Being an actress calls for last minute jobs especially on school days. But my school is very flexible because in Los Angeles, it has a lot of actors in it so they kind of understand and we have an agreement that as long as I keep good grades and they go to my teachers for recommendations when looking at excessive absences from class. So as long as I keep good grades and have a good relationship with my teacher, I’m okay to miss school for acting,” Peeters shared to The Manila Times.

“My parents are extremely helpful in all of this because they kind of put together my schedule and put together everything and they’re extremely supportive. I don’t think I can do it without my mom. She’s here today and she helps organize this entire trip. But between that and being a beauty queen, mainly pageants are on weekends and then every now and then during the week and school is everywhere in between,” she continued.

“I also wanted to share that as much as she don’t want to admit it, my mother was a beauty queen when she was younger. She won a city pageant here in Manila so when I started beauty pageants, she was a little bit hesitant but when she realized it was more of the community service than it was about walking on stage for two minutes and how it made me a better speaker. I became more comfortable with myself. Suddenly when I said I wanted to go to the Philippines, she said okay and help me with it,” Peeters happily enthused.