WASHINGTON, D.C.: The US Federal Reserve raised the benchmark lending rate on Wednesday for the second time this year, and signaled it will be more aggressive about rate increases in 2018 and 2019 amid “strong” economic growth.

And although he acknowledged concern among businesses nationwide about the uncertainty created by President Donald Trump’s abrasive trade policies, Fed Chairman Jerome Powell stressed that “the US economy is in great shape.”

The unanimous vote the Fed’s rate-setting Federal Open Market Committee brings the federal funds rate to a range of 1.75-2.0 percent, and indicated there would be two more rate increases this year and four next, one more than previously expected.

Wall Street was not happy with the aggressive new stance, worried that it signaled concerns about rising prices. All three major indexes turned negative right after the announcement and closed even lower. 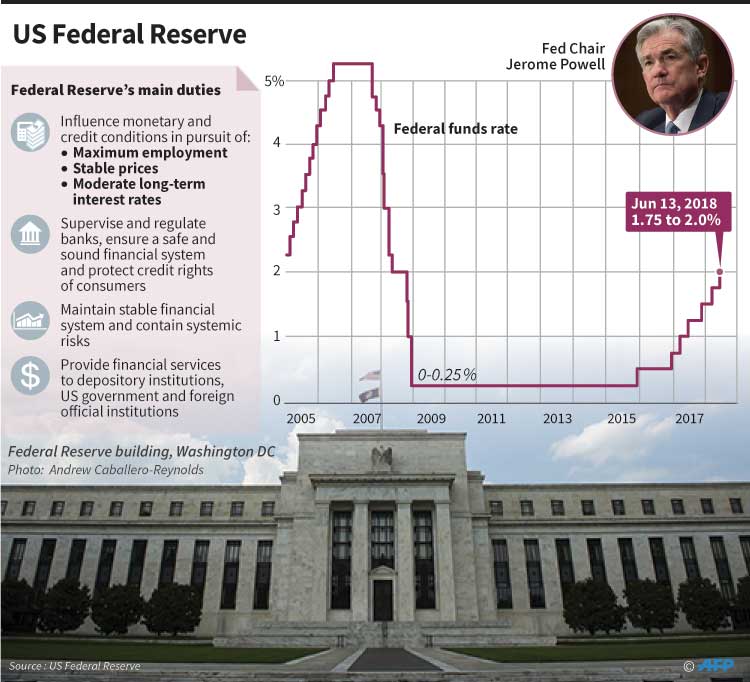 However, Powell downplayed concerns about accelerating inflation, saying the central bank would not overreact to an expected uptick driven by the recent increase in oil prices and would aim for the rate to hold at around two percent for a “sustained” period.

The Fed last raised the benchmark in March, the sixth increase since December 2015 as it tries to keep the economy growing at a sustainable pace without fueling inflation.

The FOMC statement stressed that rising rates were unlikely to derail economic growth — which the committee now characterizes as “strong” rather than “moderate.”

In another slight change of language — something that always draws the scrutiny of Fed watchers — it said “further gradual increases” in the key rate “will be consistent with sustained expansion of economic activity, strong labor market conditions and inflation near the Committee’s symmetric two percent objective over the medium term.”

The use of the terms “symmetric” and “medium term” is a clear indication the Fed is not in a hurry to get inflation to two percent and will be comfortable if prices rise above that level for a short time -- which Powell confirmed.

Even so, Jim O’Sullivan of High Frequency Economics, summarized the Fed’s outlook as “a bit more hawkish than expected.”

In its quarterly Summary of Economic Projections, officials projected the Fed’s preferred inflation measure would accelerate only slightly, ending this year at 2.1 percent rather than 1.9 percent, and holding at that level through 2020.

That index currently is at two percent but other measures of consumer and producer prices have accelerated, pushed by rising fuel prices, as well as higher metals prices that could be the result of the steep import tariffs Trump imposed starting in March.

Powell said the Fed would continue to watch prices and employment data closely to gauge the impact of inflation and the trade policies on the economic outlook.

The quarterly economic forecasts show central bankers now expect the benchmark rate to end the year at 2.4 percent rather than the 2.1 percent projected in March. And the median forecast for the end of 2019 is 3.1 percent, up from the previous 2.9 percent, which signals four hikes this year and next.

Powell also said the recent tax cuts were expected to provide stimulus to the economy.

However, the FOMC’s economic growth forecasts were little changed, with 2018 GDP seen rising 2.8 percent rather than 2.7 percent but unchanged at 2.4 percent in 2019 and two percent in 2020.

The already historically low unemployment is projected to fall even further, ending the year at 3.6 percent before settling at 3.5 percent in 2019 and 2020.

Powell also announced that he would hold a press conference after every policy meeting, rather than the current quarterly schedule.