NEW YORK: Towering Bahamian teenager DeAndre Ayton is poised to be chosen with the top pick in the NBA Draft on Thursday (Friday in Manila), with the Phoenix Suns set to snap up the 7ft center who compares himself to Shaquille O’Neal.

Barring a major shock, the 19-year-old Ayton is widely expected to be selected by the Suns, who finished the season propping up the Western Conference with a dismal record of 21 wins against 61 defeats, the worst record in the NBA.

Ayton, a dominant force in college basketball last season for the University of Arizona Wildcats, is seen as the closest thing the draft gets to a sure thing.

The teen has already impressed the Suns during a workout, with general manager Ryan McDonough describing the youngster as a rare but raw talent. 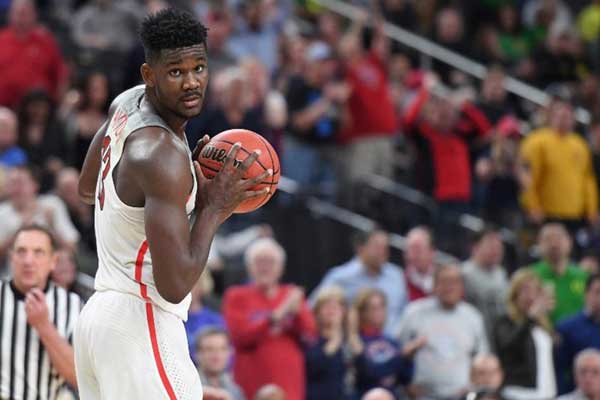 “I think this is my 16th draft in the NBA and you could probably count on one hand the number of guys with his size, athleticism, footwork, balance, touch,” McDonough told The Los Angeles Times.

“It’s a unique package. The fact that he hasn’t been playing the game all that long makes it all the more impressive,” McDonough added.

Ayton, who turns 20 next month, is certain that he’ll be the first pick in the annual selection of top college talent by NBA teams.

“I know I’m going No.1,” Ayton told a press conference earlier this month.

Standing at 7ft (2.13m) tall and weighing in at 260 pounds (117kg), Ayton has earned comparisons to Los Angeles Lakers legend O’Neal -- and he is happy to measure himself up against the four-time NBA Finals champion.

In fact, Ayton believes he could form a partnership in Phoenix with Devin Booker similar to the Lakers’ famous O’Neal-Kobe Bryant double-act which dominated the NBA.

“Honestly, I could see myself in Phoenix,” Ayton said in April. “I could see a little Shaq and Kobe 2.0,” he added.

Ayton’s self-assurance, and certainty that he will be picked first, has not endeared him to other top prospects in the draft however.

Duke University big man Marvin Bagley, who is expected to be one of the top three picks, believes he should be above Ayton in the pecking order.

“People could take it how they want, but I know DeAndre, we’re both competitive, but at the end of the day we both play this game to be the best,” Bagley told Sports Illustrated this week.

“So no, I don’t think (Ayton) should be drafted before me.”

Elsewhere on Thursday, Slovenian point guard Luka Doncic is expected to feature prominently after declaring himself available for selection.

Doncic is projected to go with the fourth pick of the draft, with the Memphis Grizzlies tipped to snap up the talented youngster.

Doncic, who recently won the Euroleague MVP award, said he expects to be chosen with one of the top five picks. Any team ignoring his talents would be making a mistake, he said.