A CONSORTIUM between China Telecommunications Corp., or China Telecom, and Filipino partner Udenna Corp. and its unit Chelsea Logistics Holdings Corp. has been declared the provisional third telco player that will attempt to break the duopoly of Globe Telecom and PLDT. 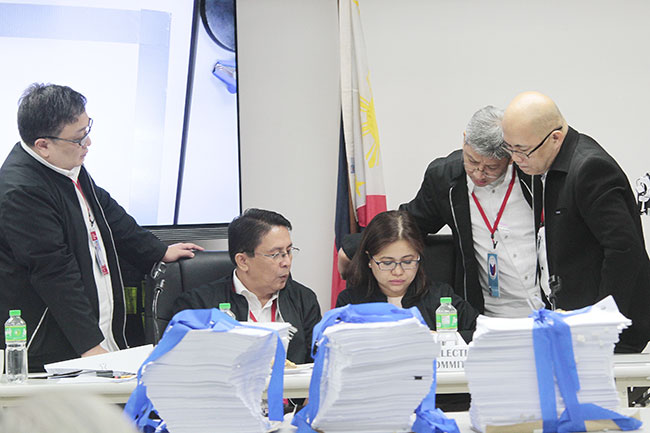 TELCO BIDDING The Selection Committee of the National Telecommunications Commission (NTC) evaluate the first selection package submitted by the Mindanao Islamic Telephone Co. during the bidding for a new major player in the telecommunications industry. The bidding was held at the NTC Building in Quezon City. PHOTO BY ROGER RAÑADA

The Mislatel Consortium emerged with the highest committed level of services or “HCLoS,” scoring 456.80 points out of the maximum 500 points, the National Telecommunications Commission (NTC) said.

The HCLoS system was used by telco regulators to determine the winning bidder, and was based on population coverage, broadband speed and spending pledges over five years.

Among the three bidders, only the consortium of Udenna and China Telecom passed the detailed evaluation after it completed all the requirements.

Chavit Singson-backed Sear Telecom Consortium, led by TierOne Communications and LCS Group of Companies, and Philippine Telegraph and Telephone Corp. (PT&T) failed to move to the next level of the bidding process.

The Sear Consortium did not qualify due to the absence of a P700-million participation security requirement, while PT&T was unsuccessful in securing a certification proving 10 years of technical experience on a national level.

PT&T President and Chief Executive Officer James Velasquez told reporters at the sidelines of the bidding process that the NTC did not issue a certification to prove its operations in the country for the past 10 years, despite its existence in the market for 56 years.

“We complied on the P10 billion paid-up capital, P700-million participation security, all the audited financial statements are in place ... All the requirements are there except the certification from the NTC, imagine that. Why is that the case? If they had given us the certification, we would have been able to comply 100 percent,” he said.

NTC Deputy Commissioner Edgardo Cabarios said the losing bidders had three days to file their motions for reconsideration. The selection committee has another three days to resolve the motions.

PT&T and Sear Consortium may also opt to file a protest, but they have to cough up P10 million.

“Once everything is resolved, then the [China Telecom and Udenna] group would be declared as the NMP. They have 90 days to submit their detailed rollout,” Cabarios said.

Under the agreement, Mislatel is not allowed to have its franchise permits and franchises used by somebody else without a prior official consent of DigiPhil Technology], a subsidiary of TierOne and a member of Sear Consortium.

Sear Consortium lawyer Raoul Creencia said that while the contract did not prohibit Mislatel from joining other groups, DigiPhil had “the right of first refusal.”

The Chavit Singson-backed consortium plans to file a complaint before the Makati or Pasig Regional Trial Courts (RTC), “to stop Mislatel from allowing its franchise to be used by somebody else in the absence of a prior consent by its counterparty which is DigiPhil.”

“If Mislatel will be adjudged to have breached the contract, it is therefore not eligible to partner with, so there’s no CF (congressional franchise) [for the Udenna-China Telecom consortium]. That’s a fatal flaw,” Creencia said.

Instead of participating in the selection process, Now Telecom on Wednesday filed a case against the NTC before the Court of Appeals (CA).

“Now Telecom has decided to pursue its [legal] remedies by filing a petition with the CA and challenge the declaration made by the [Manila RTC], instead of participating in the bidding this morning,” said Mel Velasco Velarde, president and chief executive officer of publicly listed Now Corp.

Miguel Lopez, Now Corp. investor relations officer, told reporters that their legal counsels had advised them not to submit their bid documents at the last minute so as not to adversely affect the case.

“We were advised not to file [a submission in connection with the bidding process]. If given the chance that the legal remedies would allow us to file, of course we would file. We are ready,” Lopez told reporters.

The move came a day after the Manila RTC Branch 42 denied Now Telecom’s plea to stop the enforcement of certain provisions of the NTC on the selection of the third player.

Now Telecom, an affiliate of Now Corp., filed a complaint against the NTC on October 9, claiming that the selection process had turned into a “money-making scheme” for requiring bidders P700 million worth in participation security, P14 billion to P24 billion in performance security and a P10-million non-refundable appeal fee.

The firm said the financial provisions stated in the NTC memorandum circular were “onerous, confiscatory and potentially extortionary.”

Sen. Grace Poe also on Wednesday said security concerns earlier raised over the participation of a foreign firm in the bidding should not be “sidestepped.” She did not identify the foreign firm.

The senator said the Department of Information and Communications Technology should be transparent and disclose considerations for deeming a bidder qualified.

“The Armed Forces of the Philippines and other intelligence agencies should weigh in on the qualifications [of the winning bidder],” according to Poe, chairman of the Senate Committee on Public Services.

A paper published recently by the US Naval War College and Tel Aviv University in Israel accused China Telecom of “infiltrating western internet networks” since 2015.

It also said the telco player was hijacking internet traffic in the United States.|

“China Telecom has already relatively and seamlessly hijacked the domestic US and cross-US traffic and redirected it to China [for] over days, weeks, and months,” the study claimed. “The prevalence of and demonstrated ease with which one can simply redirect and copy data by controlling key transit nodes buried in a nation’s infrastructure requires an urgent policy response.”