The visit of Chinese President Xi Jinping to the Philippines this month will further strengthen relations between Manila and Beijing, according to House Speaker Gloria Macapagal-Arroyo.

In her keynote speech at the Boao Forum for Asia (BYA) Summit 2018 held at the Hong Kong Convention and Exhibition Center over the weekend, Arroyo said Philippine-China ties had a deep foundation over the past administrations and continue to be “favorable” under President Rodrigo Duterte.

Xi is scheduled to arrive in the country on November 23 after the Asia-Pacific Economic Cooperation (APEC) meeting in Papua New Guinea.

“I expect President Xi’s visit to further strengthen relations between our two countries,” Arroyo told delegates to the summit. 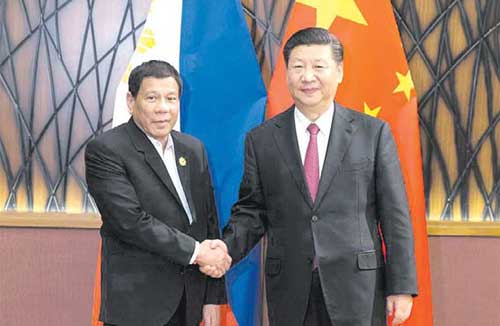 Xi Jinping meets Duterte during the Belt and Road Forum (BRF) for International Cooperation at the Great Hall of the People in Beijing on May 15, 2017.

“Our evolving relationship is part of a history that dates back to previous leaders of our two countries, so it has a deep foundation. Now, the current status continues to be favorable, because President Rodrigo Duterte is a friend of China,” she said.

Arroyo, a member of the Boao Forum Asia board, added that keeping a good relationship with Beijing is important to the Philippines because of China’s geographical location, trading partnership, proven capability in infrastructure development and “dynamic and fast-growing economy.”

“China is increasingly involved not only in bilateral dealings, but also collectively, such as through the Asean [Association of Southeast Asian Nations], of which the Philippines is an active member,” she said.

“China’s economy remains the most dynamic and fast-growing among the major nations, and will soon become the largest economy in the world, so of course, it is good to be friends with China,” Arroyo added.

She cited Xi for pointing out the need for greater cooperation and commitment to building an open economy.

Arroyo said the Regional Comprehensive Economic Partnership, a proposed mega free trade agreement between member-states of the Asean, including the Philippines, and six Asia-Pacific states, including China, will provide the impetus for trade expansion

The BFA Youth Summit is held annually and convenes political leaders and scholars across Hong Kong, Mainland China and other countries to discuss Asian economic trends and innovations.

Arroyo brought 10 young Filipinos to the summit for them “to gain valuable insights on China’s growth.”

A joint oil exploration by China and the Philippines in the South China Sea will topbill Xi’s visit, according to foreign relations experts based in Manila.

Li Meiting, assistant professor of International Relations at the Department of Political Science of the University of the Philippines-Diliman in Quezon City, said the joint oil exploration will define future cooperation between Beijing and Manila.

“The question is who will take the major responsibility and who will command bigger influence. However, the joint oil exploration will bring in more economic development both to the Philippines and China,” she told a forum on Philippine-China relations, particularly the geopolitical perspective and realities, held recently at Miriam College in Quezon City.

Meiting, who previously worked at Xiamen University and earned her doctorate at the University of Exeter in the United Kingdom, said other areas of cooperation have been lined up for discussion between Xi and Duterte in the wake of the signing of more than 27 memoranda of understanding during the Philippine leader’s visit to Beijing early this year.

Alvin Camba, a doctoral student at the Johns Hopkins University and a fellow at Boston University, said a huge capital is needed for the joint exploration.

He noted that China has big investments in offshore gaming in the Philippines, including planned casinos in Boracay.

Camba blamed local businessmen and politicians for delaying completion of infrastructure projects of Chinese firms in various parts of the country.

“Local elites and politicians are delaying the projects,” he said, citing much delayed bridge projects over the Pasig River.

Camba added that several Chinese projects, such as a proposed reclamation in Davao City, had been shelved because of strong opposition.

“The BRI is dead in the water, including that one in Myanmar. China [does not have many] friends. So, it better be kind to us Filipinos. We should be geographically friends,” Ortiz said.

He said the South China Sea should be jointly declared by claimant countries as a peace and neutrality zone.

Aside from the Philippines and China, Taiwan, Malaysia, Vietnam and Brunei Darussalam also contest parts of the South China Sea.

Francois-Xavier Bonnet of France said his country’s claim to the Paracel Islands in the disputed sea has been dropped but that to the Spratlys remains.

Herman Joseph Kraft, another professor from UP-Diliman, said Philippine-China relations are constantly changing but that being pro-China does not equate to being anti-America.

The forum was organized by the Philippine Association for Chinese Studies based in Miriam College led by its president Rommel Banlaoi.