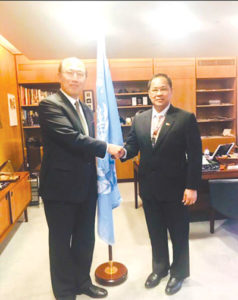 The 10-year MIDP was presented to IMO Secretary General Kitack Lim during the IMO Council meeting in London last November 23.

Lim expressed optimism on the future of the Philippine maritime industry and commended Marina for its efforts to arrive with an MIDP.

Marina is mandated to formulate this MIDP pursuant to Presidential Decree No. 474, series of 1974.

Meanwhile, Vingson met the representatives of the European Commission (EC) to provide updates on the implementation of the International Convention on Standards of Training, Certification and Watchkeeping (STCW) for seafarers 1978, as amended.

Marina has revised seven of its old Circulars to harmonize these with the STCW Convention, cascading its implementation with the raising of standards for certifications.

Marina‘s training standards were upgraded with the approval of the refresher course in advanced firefighting, the four mandatory training courses on passenger ships and the electro-technical officer’s course.

Marina has developed its comprehensive internal processes according to its quality management system that gave rise to a necessary information technology support system to evaluate and monitor maritime education and training institutions.

A joint memorandum was issued by Marina and the Commission on Higher Education making Marina (through STCW organization) as the lead evaluator in effectively monitoring maritime education programs. Marina has judiciously monitored the Maritime higher education institutions.

Marina has expressed its appreciation to top Filipino seafarer-employing nations for their support to the Philippines in producing world-class and competent seafarers.