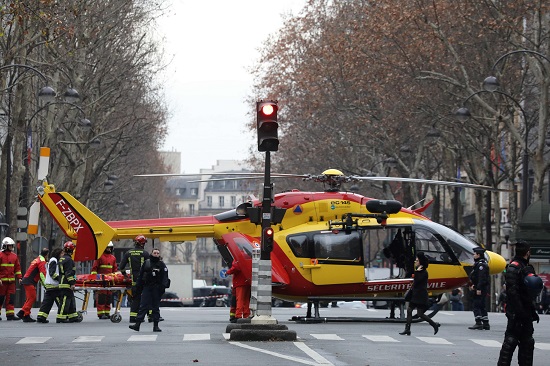 An injured person is evacuated on a stretcher in an helicopter of the emergency services (securite civile) on the Place de l'Opera, after the explosion of a bakery on the corner of the streets Saint-Cecile and Rue de Trevise in central Paris on January 12, 2019. AFP PHOTO

Dozens of tourists, suitcases in hand, were evacuated from the many nearby hotels in the area, a popular weekend shopping destination for locals and visitors alike.

Other residents were in bathrobes or quickly dressing in the street as police helicopters circled overhead.

"We were sleeping when we heard the noise, it sounded like an earthquake," a teenager who lives on a nearby street told Agence France-Presse.

The blast came with the city on edge ahead of expected protests by "yellow vest" anti-government demonstrations, which have often degenerated into violence and vandalism in Paris and other cities in recent weeks.

The central Place de la Concorde and surrounding areas were locked down by police barricades, as thousands of officers stood guard on the Champs-Elysees and other areas where protesters have clashed with security forces. AFP